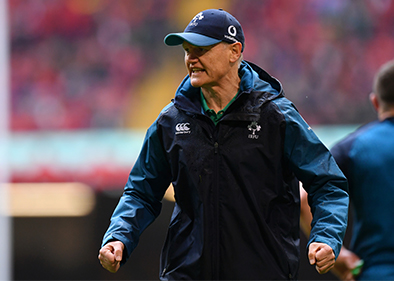 Current Head Coach Of The Ireland National Side

Joe Schmidt is the current head coach of the Ireland rugby union side. Born in New Zealand, Schmidt has coached a number of sides from all across the globe and has applied his coaching expertise to be successful both internationally and domestically. In 5 years as head coach of Ireland, Schmidt has guided the nation to 3 Six Nations Championships and their first-ever wins over New Zealand.

Schmidt’s coaching career started at Bay of Plenty in 2003, as an assistant coach, he guided the club to Ranflury Shield success after defeating Auckland to be crowned champions. Schmidt left his role at Bay of Plenty to take on a more established assistant coach role at New Zealand giants, the Blues. He joined in 2004 before moving to French club Clermont in 2007.

His time at Clermont was very successful as he helped guide the club to runners-up in two Top 14 competitions, in 2008 and 2009 respectively. In his last year with the club, he helped guide them to victory in the Top 14 competition; this victory in 2010 was Clermont’s first Top 14 success after 11 attempts in the final. Schmidt moved to Leinster in 2010 for his first taste of a head coach role.

Leinster enjoyed lots of success during Schmidt’s time as head coach, he guided the team to 2011 Heineken Cup victory after a comfortable win against the Northampton Saints. Unfortunately, Leinster came runners up in both the 2011 Celtic League and the 2011-12 Pro12, this was soon forgotten though as he coached the side to 2012 Heineken Cup success meaning Leinster retained the title. His final year at Leinster was another successful period for the club, Schmidt’s side won the Amlin Challenge Cup and the Pro12, this led to him being offered the head coach role at Ireland.

He won his first silverware with the nation after a win against France in the 2014 Six Nations meaning Ireland lifted the trophy. With Schmidt as coach Ireland won their tenth test match in a row, equalling an Irish record. They defended the Six Nations in 2015 in dramatic style, they had to beat Scotland by 21 points and England had to win by 26 points or less in order for Ireland to be crowned champions; Ireland won their match 40-10 and England could only manage a 55-35 win. They won the championship again in 2018 to give Schmidt his third Six Nations Championship since becoming the head coach in 2013.

Schmidt is set to retire after the 2019 World Cup, he has had an extremely successful time as a coach and often reflects on his different roles during his time as a rugby speaker. His charisma and expertise make him the ideal speaker for your event, he can discuss the importance of leadership, determination and maximising success.

When at corporate events, Schmidt often discusses the following topics:

To book the Ireland rugby union coach, Joe Schmidt, as the rugby speaker for your corporate event, function or conference, simply contact the Champions Rugby Speakers agency by filling in our online contact form. Alternatively, call a booking agent directly on 0207 1010 553.