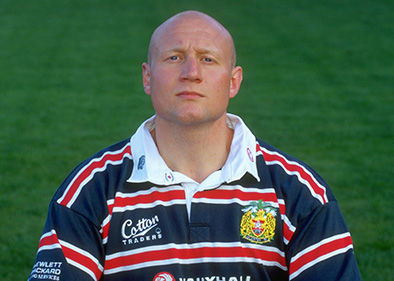 A true sporting star and Leicester Tigers legend, Derek Jelley was born in Nuneaton and educated at Heathfield High School, Earl Shilton. A loose head and tight head prop, prior to joining the Tigers in 1993, Derek played for Market Bosworth rugby club before joining the professional ranks. His debut match for the Leicester Tigers in 1993 saw him break his collarbone after just 16 minutes of play. This injury did little to halt his career and he went on to make 141 appearances for Tigers as a prop and become somewhat of a crowd favourite and remains an extremely popular figure amongst fans and supporters. A true gentleman, following his retirement Derek Jelley has gone on to become a very successful and sought after rugby speaker appearing at a host of events, dinner and award presentations across the nation and in particularly around Leicestershire.

Derek held his own at Tigers despite extremely tough competition and went on to 35 appearances during the 1999 season, a remarkable achievement considering he was competing for the loose head position with Graham Rowntree. A fantastic effort and tribute to his ability, Jelley is able to discuss the hard work that was required along with his drive and determination to gain selection over one of the greats of the game. Derek is the ideal rugby speaker able to travel to schools and colleges to give motivational speeches and advice on how to make ambitions a reality.

One of the most entertaining rugby speakers, Derek’s record of playing for the Tigers for 10 years saw him win 5 Premiership titles and 2 European cups making him the ideal personality to speak about peak performance and maximising success. An integral part of the club’s decorated history and at the centre of a time of sheer dominance, Jelley is able to provide an insight into what made the team such a resounding success as he shares their secrets during his work as a rugby speaker.

Despite a serious injury finally ruling Derek Jelley out of the game at the age of 31, he is one of the best known faces at the Leicester Tigers and he has played host to the executive 1886 Suite since 2004 further emphasising his ability to work as both at rugby speaker or host at events. Derek’s experience in this role makes him an ideal personality to host your very own event.

His unique experiences and undeniable charm and good humour make him a formidable motivational speaker, enthusing audiences with his own success stories. He also entertains audiences with his own experiences as a professional rugby player. Having played for 10 years with one of rugby union’s best sides, his unique take on the sporting world provides a fascinating story for a wide range of occasions. A true professional and charismatic figure, the incredibly engaging Derek Jelley is available to hire as a rugby speaker or host for any event, dinner or function.

When he’s at corporate events, Derek is known to cover the following topics:

To book Leicester Tigers Legend, Derek Jelley, as the rugby speaker for your corporate event, function or conference, simply contact the Champions Rugby Speakers agency by filling in our online contact form. Alternatively, call a booking agent directly on 0207 1010 553.