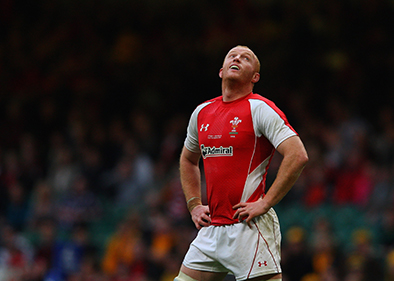 Martyn Williams is a retired Welsh rugby union player. Williams was a sensational flanker for both club and country. He was Wales’ most-capped forward with 100 appearances until 2013, when he was surpassed. Williams also represented the British and Irish Lions on 4 occasions between 2001-2009.

Williams’ domestic career started at Welsh side Pontypridd in 1994, he went on to play 94 times for the club before he left in 1999. During his time at the club, he won the Welsh League in the 1996/97 season. He signed for Cardiff Blues in 1999 and this is where he would remain for the duration of his domestic career. Williams played a total of 226 games for the Blues and captained the club from 2002 until 2005.

In 1996, Williams made his international debut against the Barbarians in a 31-10 victory. After 7 years in the international side, Williams was made the captain of the Welsh squad for the first time; his first game as captain was in a Six Nations match against Scotland. 2005 proved to be an unforgettable year for Williams as he earnt his 50th cap for Wales in a Six Nations match against England. Not only did Wales win the Grand Slam that year, but Williams also won the player of the Championship and was an influential part of their squad throughout.

Although no longer Wales’ most-capped forward, Williams does hold the Welsh record for most caps in the Five/Six Nations. Another milestone was completed by Williams in 2012 as he played in his 100th international cap for Wales. This turned out to be his last international game for Wales as he announced his retirement in 2012. Williams’ astonishing career didn’t go unrecognised as he was appointed MBE in 2012 for his services to rugby.

A humourous, witty and bubbly character, Williams is the perfect speaker for your upcoming event or function. As a rugby speaker, Williams often reflects on his successful career as a rugby player, he also discusses teamwork and leadership, peak performance and dealing with pressure/

When at corporate events, Williams often discusses the following topics:

To book former Cardiff Blues and Wales rugby player, Gavin Henson, as the rugby speaker for your corporate event, function or conference, simply contact the Champions Rugby Speakers agency by filling in our online contact form. Alternatively, call a booking agent directly on 0207 1010 553.