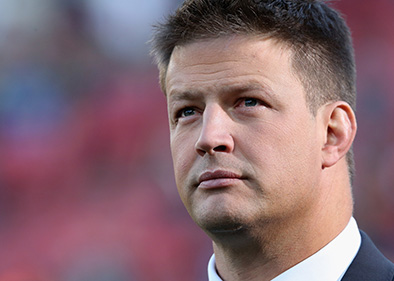 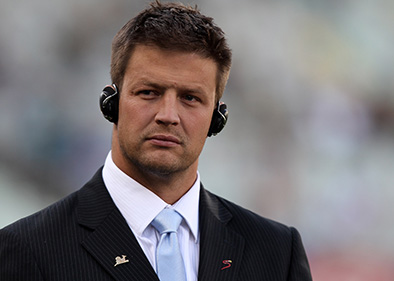 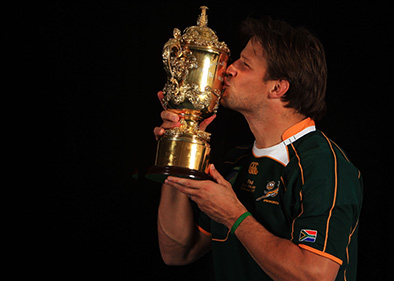 Zimbabwean-born rugby speaker and former International rugby player, Bobby Skinstad played professional rugby union for over a decade and is best known for his roles as flanker and number 8 for the South African national team. Skinstad enjoyed a quite remarkable and incredibly decorated career, the Rugby World Cup winner also won several Currie Cup titles as well as the Tri-Nations. Alongside his 10 year career for the Springboks, Bobby Skinstad played domestically for Western Province before turning to franchise rugby to play for the Sharks, Stormers and Cats before semi-retirement brought him to England. Taking semi-retirement in 2007, Bobby Skinstad now works as a dedicated rugby speaker and commentator, appearing at after dinner speaker events across Britain.

Remarkably Bobby Skinstad was eligible to represent 3 countries at International level with a choice of Zimbabwe, South Africa and Ireland through his Irish mother who hails from County Louth. Choosing to remain in South Africa, Skinstad was selected by Western Province for the Currie Cup and Super 12 and went on to captain both sides before moving to the Johannesburg Lions. It was his consistent performances as both a flanker and number eight that saw Skinstad go on to represent his national side more than forty times, taking part in the 2009 Rugby World Cup and acting as the Springbok’s team captain from 2003, a role he had taken on for South African junior teams and domestically in the past highlighting his obvious leadership capabilities. As a rugby speaker Bobby Skinstad reflects upon his career in South Africa sharing his highlights as well as providing an intimate and fascinating insight into World Cup rugby.

In addition to this Bobby Skinstad also briefly played for the Welsh side the Newport Gwent Dragons, where played just 9 games upon his arrival in the UK which has now seen him settle her and therefore increasing his demand as a rugby speaker. Skinstad has also continued to work as a rugby speaker in his home nation and often returns to take part in games following his move to Britain in 2004. A regular fixture in the notorious Barbarians team, Bobby Skinstad has also worked extensively as an analyst and occasional presenter covering the Super 14, Currie Cup and NPC Tournaments for Sky Sports, further emphasising and strengthening his credentials and content as a rugby speaker.

In his work as a rugby speaker Skinstad discusses the importance of dedication and ambition in sportsmanship along with disclosing his experience as captain for both Western Province and the Golden Lions, not to mention the national side, demonstrating his own dedication to the sport. Outside of his work as a rugby player and sports speaker Bobby Skinstad has dabbled in sports investment, he briefly took part in a group attempting to take over an English club in London with businessmen Johann Rupert and Wayne Huizenga. This again makes for a fascinating account during his performances as a rugby speaker as Bobby showcases the transition he made so effortlessly that many find so difficult.

Skinstad has also worked as a fundraiser and after dinner speaker for a number of charitable organizations including taking part in 2005’s Dubai 7’s for Stefan BHF to raise money for the British Heart Foundation in memory of former England coach Stefan Czerpak, who died of a heart attack in 1998. He was also a part of a joint venture with the Saatchi & Saatchi advertising conglomerate and opened his own sports management company, Esportif, which runs out of the groups London headquarters. A highly skilled and talented figure who has succeeding in all walks of life, the Rugby World Cup winner and South African captain, Bobby Skinstad is available to hire as a rugby speaker for any event, dinner or function and is certain to be a fantastic addition to any occasion.

When he’s at corporate events, Bobby is known to cover the following topics:

To book Former South African Captain, Bobby Skinstad, as the rugby speaker for your corporate event, function or conference, simply contact the Champions Rugby Speakers agency by filling in our online contact form. Alternatively, call a booking agent directly on 0207 1010 553.