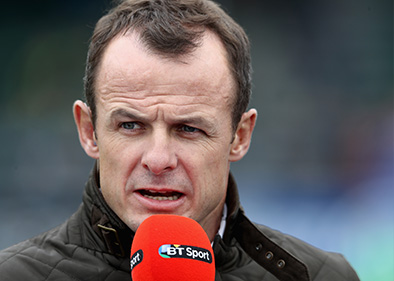 The legendary Leicester Tigers, England and British and Irish Lions utility back turned television personality, Austin Healey is one of the most respected and well recognised faces in English rugby. Playing over 200 matches over the course of a decade for the Leicester Tigers as well as representing his a nation on more than 50 occasions, Austin Healey was renowned for his competitiveness and outspoken nature gaining him the infamous nickname, ‘The Leicester Lip’, a topic he regularly breaches in his typical fashion during his work as a rugby speaker. Healey’s popularity, demand and stature has grown further following his retirement largely due to his tremendous performances on hit BBC show Strictly Come Dancing alongside his commitments as an incredibly popular pundit and analyst covering rugby matches across the world. A folk hero and fan favourite amongst Leicester Tigers in particular, the diverse and versatile Austin Healey is now an extremely sought after rugby speaker across the nation working at a host of event, dinners and functions.

Beginning his career with Birkenhead Park FC it wasn’t long until Healey made a real impression showing people he was destined for great things. Healey played for England U21 in 1992 and went on to represent England A and the Barbarians '96 tour of Japan before signing with the Leicester Tigers. Signing with the club as a scrum-half, Healey had actually played as a winger and outside centre previously however his performances meant he was selected to make his full International debut in 1997 against Ireland in the Five Nations tournament before going on the British and Irish Lions Tour that same year. Incredible accolades and achievements so early into his playing career, Austin Healey discusses his move to Leicester sharing his fondness and affinity with the club along with the delight, honour and privilege he felt representing both England and the Lions so early into his career.

Playing in more Five Nations which eventually turned into the Six Nations tournaments along with the 1999 Rugby World Cup, Healey made the transition from scrum half to fly-half for the Tigers and would soon do the same on occasions for England. Undoubtably a career high which he speaks about during his performances as a rugby speaker came in 2001 when he made a break during the Heineken Cup final that resulted in the winning try. Again in this match Healey had started at scrum half with fellow rugby speaker Andy Goode at fly-half however Austin was switched to fly-half in the closing minutes. Continuing his trend of scoring important points during his career, Austin Healey also scored the second and decisive try against Munster when Tigers retained the cup the following year. A spell of excellence for both Healey and the Leicester Tigers, Healey shares the secrets behind the Tigers success which put them at the helm of domestic rugby largely due to Austin.

Austin Healey remained a prolific performer for the remainder of his career consistently contributing with match winning performances for both club and country before a culmination of injuries and age resulted on him calling time on a thoroughly distinguished and illustrious career. With 15 International tries to his name along with over 300 points in domestic rugby, Austin Healey was the epitome of a team player and a true luxury for any side largely due to his phenomenal versatility which saw him play in every position possible as a back during his wonderful career. Turning his attention to work as a pundit and analyst, Healey has become a major figure on rugby coverage offering vital and insightful views on the game that he eloquently transfers to his work as a rugby speaker providing fantastic value and truly unique content and perspective of the game.

A tremendous performer on the field and a fantastic media personality off it, Austin Healey really is an incredibly gifted and talented figure that has succeeded in everything he has done. An idyllic personality exuding charisma coupled with an impressive aura, the Leicester Tigers legend, Austin Healey is available to hire as a rugby speaker for any event or function where he will certainly be a hit with the audience leaving guests with an unforgettable experience.

When he’s at corporate events, Austin is known to cover the following topics: