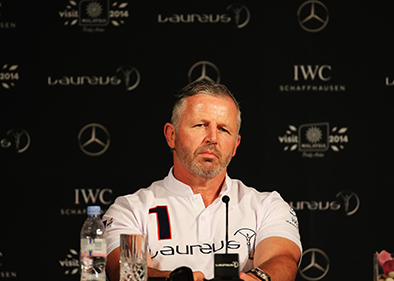 Sean Fitzpatrick is a former Auckland and New Zealand rugby union player, Fitzpatrick is regarded as one of New Zealand’s finest rugby players of all-time. Fitzpatrick began his domestic and international career in his first year as a professional in 1986, his debut for New Zealand was in a victory against France.

Fitzpatrick was selected for the inaugural Rugby World Cup in 1987, although missing the first couple of games, Fitzpatrick was called into the side to replace injured captain, Andy Dalton. He cemented his place in the squad and helped the nation get to the final, he kept his place in the squad for the final and New Zealand were victorious, they beat France 29-9 to win the first-ever World Cup. Fitzpatrick career continued to develop and he was eventually awarded the captaincy in 1992, he then went on to captain the country until his retirement.

He captained his first World Cup in 1995 and led his country to the final, a great personal and team achievement for all involved. Fitzpatrick continued to play a part in successful domestic seasons, he won the NPC with Auckland in 1996 and the Super 12 with the Blues in 1997. His final test appearance before retiring from rugby was in a 42-7 win against Wales at Wembley.

Fitzpatrick’s career came to an end in 1997 as he announced his retirement from all forms of rugby. During his successful career, he won the NPC 8 times with domestic side Auckland, he won the Super Rugby with the Blues on 2 occasions. For New Zealand, he won 1 World Cup, 2 Tri Nations and 9 Bledisloe Cups. He won a huge number of major trophies during his career showing that he deserves to be recognised as one of the finest rugby players New Zealand has ever produced.

Fitzpatrick showcases his wonderful personality and great charisma in his time as a rugby speaker, he often speaks about his wonderful career but also reflects on peak performance, maximising success and the importance of teamwork and leadership.

When at corporate events, Fitzpatrick often discusses the following topics:

To book Former Auckland and New Zealand player, Sean Fitzpatrick, as the rugby speaker for your corporate event, function or conference, simply contact the Champions Rugby Speakers agency by filling in our online contact form. Alternatively, call a booking agent directly on 0207 1010 553.