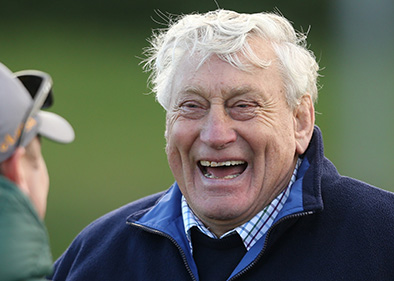 An Ireland and British & Irish Lions legend, Willie John McBride is a former Rugby Union footballer who became one of the most renowned locks of his generation. A wonderful rugby speaker, Willie can mix a selection of anecdotal tales with precious advice of his time in elite sports. A wonderful character, McBride will prove to be an engaging and interactive rugby speaker and hit it off with the crowd in an instant.

Not introduced to Rugby until the age of 17, Willie began to play for his school’s first XV before joining Ballymena RFC. Selected to play for Ireland in 1962, Willie’s first Test came against England at Twickenham and he was selected for the British and Irish Lions later the same year ending a memorable year. Continuing to play for his national side during the 1960s, McBride played his part in the side that first defeated the Springboks as well as the first home nations team to defeat a Southern Hemisphere team at home. With lessons learnt from a career in elite competition, Willie breaches topics of peak performance, achieving goals and maximising success during talks as a rugby speaker.

A stalwart fixture for the Lions side, Willie featured on every tour for the side, including his captaincy of the 1974 squad in South Africa. Winning 3-0, McBride had captained a tour that became the first to ever win a series in South Africa. A brutal and boisterous tour, Willie describes as a rugby speaker the conduct of players before the likes of video cameras and replays in the game, with only officials to keep kicking, punching and head-butting at bay.

Following Willie’s playing career, he has gone on to coach the Irish national side as well as acting as the manager for the 1983 Lions Tour to New Zealand. Inducted into the International Rugby Hall of Fame in 1997, Willie’s illustrious career makes him a true great of the sport and a pre-eminent rugby speaker. An ideal personality for both sporting and business events, McBride can mix question and answer sessions with presentations as a rugby speaker, ensuring all audience members gain a wonderful insight into a golden era of Rugby. The opportunity to gain and insight into the mind and life of a Rugby Hall of Fame inductee is certainly one not to be missed and the iconic Willie John McBride is available to hire as a rugby speaker for any event, dinner or function where his presence will most certainly raise the prestige and contribute to an unforgettable occasion.

When he’s at corporate events, Willie is known to cover the following topics: