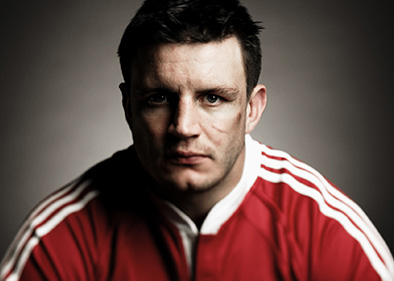 Martin Corry MBE is an English rugby legend whose amazing sporting talent has given him a string of career achievements. Ending his career in his tenth season with Leicester Tigers, Martin captained the team in multiple grand finals, winning both the Premiership and the EDF Energy Cup – marking the first double of Rugby’s professional era. A pre-eminent rugby speaker, Martin is a highly sought after personality on the after dinner speaker circuit.

Following his remarkable season with his third Rugby World Cup campaign, captaining the team for their crucial pool games, resulting in qualification for the knockout stages. Martin and his England colleagues beat Australia in the quarter finals and France in the semi-finals however their dream ended with England’s defeat to South Africa in the final of the international competition. Martin Corry discusses World Cup rugby during his work as a rugby speaker and explains the pressure and challenges that come with playing the most prestigious tournament in the world and the pinnacle of rugby.

After making his Tigers debut in August 1997, Martin has enjoyed a decorated career, winning six Premierships, two European Cups and an Anglo-Welsh Cup. A Leicester Tigers legend, working as a rugby speaker Corry explains what made the Welford Road side such a formidable force during his career as well as sharing hilariously entertaining tales and anecdotes which are always received fondly by guests. With 64 caps for England, professional rugby player Martin Corry was a core member of the English World Cup winning squad in 2003 and a runner up four years later in South Africa. His renowned skill and leadership qualities have also seen him selected to tour twice in New Zealand and Australia with the British & Irish Lions.

Martin Corry’s extensive career is represented by the multiple awards he has received. Recognised as the Premiership and Professional Rugby Players Association Player of the Season awards of 2004/05, he was however beaten by team mate Castro Giovanni for the same award two years later. An extremely consistent player in the English game, Martin was awarded an MBE in the 2004 New Year’s Honours for his services to Rugby. Martin is a very worthy addition to events and conferences, as an after dinner and keynote rugby speaker, Martin has become a sought after personality, interacting with audiences as an after dinner speaker with competitive spirit, charisma and passion for success.

Corry is a truly motivational rugby speaker and his sporting background allows him to provide highly effective performance coaching.

A Leicester Tigers legend and World Cup winner that exudes leadership, Martin Corry MBE shares motivational and inspirational advice with guests as well as providing an invaluable insight into what it takes to be successful. The consummate professional and gentleman, Martin Corry MBE is available to hire as a rugby speaker for any event, dinner or function where he is certain to be incredibly popular with guests.