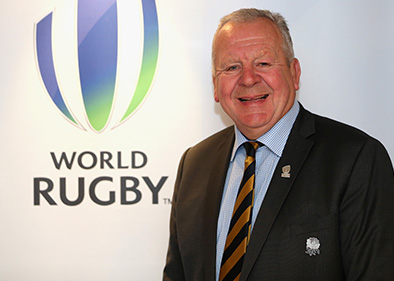 Bill Beaumont CBE is a former rugby union player that is best known for his time as captain of the England rugby team for whom he earnt 34 caps. The British and Irish Lions player enjoyed his greatest moment as captain when he led England to the incredibly unexpected yet unforgettable 1980 Grand Slam which captured the hearts of nation. Playing as a lock during his illustrious career, following his retirement Bill Beaumont has gone on to work in advisory and administration roles within the game and he is currently a member of the International Rugby Board as well as being Chairman of the Rugby Football Union. The former host of hit BBC series, A Question of Sport, Beaumont was awarded a CBE for services to sport and rugby in 1982. A wonderful character with tremendous stature within the game, the incredibly well respected Bill Beaumont CBE also works as a highly sought after rugby speaker appearing at events and functions across the UK.

His prominent career as a rugby player began playing for Flyde Rugby club in Lancashire where he remained for the entirety of his career and in 1975 he made his International debut for England going on to represent his nation on 34 occasions. Captaining the team on 21 occasions, Beaumont toured the majority of the Southern Hemisphere with England and also played for the prestigious Barbarians in 15 matches. A member of the 1977 British and Irish Lions tour of New Zealand, as a rugby speaker Bill Beaumont CBE reminisces on his playing career while sharing fascinating tales and anecdotes alongside truly remarkable experiences he garnered making him an excellent choice for a rugby speaker as his experiences both on and off the pitch have provided him with a wealth of entertaining and inspirational content to present as a rugby speaker.

An inspiring captain of the North of England whom he led to victory over the All Blacks in 1979 and also of England who won their first Grand Slam for 23 years in 1980, Beaumont was also the first English captain of the British and Irish Lions since Doug Prentice in 1930. As a rugby speaker Bill Beaumont shares invaluable leadership advice that saw him enjoy tremendous success as a leader. Eventually retiring as a result of successive concussions, Beaumont’s high profile as an instantly recognisable figure saw him become a regular contestant on the BBC quiz show, A Question of Sport before eventually become the show's longest-serving captain.

Taking up more of a role in rugby administration and organisation, in 1999 Beaumont became the English representative of the International Rugby Board and soon after in 2012 became the Chairman of the Rugby Football Union. Beaumont also built on his success as a Lions captain to become tour manager of the team for their 2005 tour of New Zealand and shares this journey and experiences and guests during his performances as rugby speaker in particularly citing the changes the game has seen as well as providing both inspirational and hysterical content from the tour.

An incredibly impressive individual, in addition to all of his achievements within rugby, Bill Beaumont is also the managing director for his family’s textile company in Lancashire and an Honorary President of the rugby charity Wooden Spoon. With the English County Championship title now named in his honour, the Bill Beaumont Cup, he truly is one of Britain’s most popular and recognised sports personalities in the nation. Bill Beaumont CBE is known for his motivational speaking and rugby talks with his speeches undoubtably being full of character and filled with vast knowledge of the sport. Sharing humorous and fascinating stories of his time as captain of the English rugby team, the legendary Bill Beaumont CBE is available to hire as a rugby speaker for your event and is certain to raise the prestige at any occasion where he is in attendance.

When he’s at corporate events, Bill is known to cover the following topics: