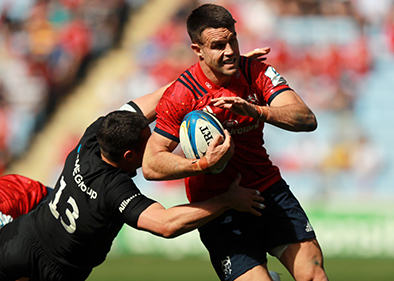 Conor Murray is a current Irish rugby union player who plays for giants Munster in the Pro 14. Playing at scrum-half, Murray has enjoyed a fantastic career to date and is an Ireland regular.

Murray, born in Limerick and joined local side Munster in 2010. He made his debut in a Celtic League game in 2010, Munster won the match 18-12 and gave Murray his first taste of professional success. He tasted success in the 2011 Celtic League after Munster defeated Leinster in the final, after this season he was named the academy player of the year. In 2017, Murray was announced as the Rugby Writers of Ireland Player of the Year and the Rugby Players Ireland Players’ Player of the year. He was nominated for the latter a year later as well.

He received his first international call up in 2011 and made his debut against France in the World Cup warm-up match. He featured regularly in the 2011 World Cup, a tournament where Ireland got to the quarter-finals. Murray played a part in the 2012 Six Nations before getting injured which meant winning the Championship in the 2014 competition was extremely well-deserved. Murray played another vital role in the 2015 Six Nations which saw Ireland win back-to-back championships for the first time since 1948/49.

Murray is a charismatic, quirky and intriguing character who often discusses his ongoing career as a professional rugby player. As a rugby speaker, he delves into topics such as dealing with pressure, the importance of teamwork and dedication, and also his sporting success.

When Murray speaks at corporate events, he often discusses the following:

To book current Munster and Irish rugby player, Conor Murray, as the rugby speaker for your corporate event, function or conference, simply contact the Champions Rugby Speakers agency by filling in our online contact form. Alternatively, call a booking agent directly on 0207 1010 553.