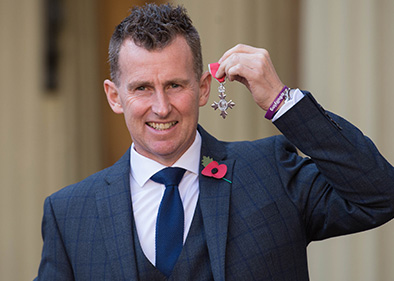 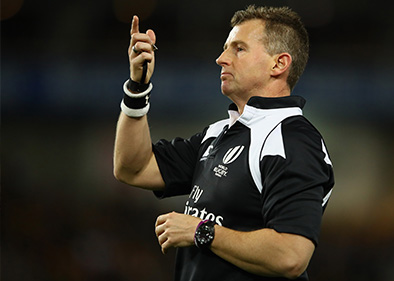 One of the most highly respected rugby referees in the world, Nigel Owens has refereed multiple Heineken Cup finals and officiated World Cup matches many times, making him one of the most accomplished and influential authorities in the sport. A fabulous rugby speaker, Nigel delivers a humorous insight into elite rugby and how to discipline giants of the sport.

Appointed as an international referee in 2005, Owens refereed his first game against Ireland and Japan in Osaka. In 2007, Nigel made his World Cup debut in Lyon, officiating for Argentina against Georgia. Since the Nigel’s reputation for decisive leadership on pitch and tough discipline for offenders has led to him becoming a favourite for fans and pundits, delivering consistent performances with accuracy and sharpness only associated with the best of the sport. Overseeing some of the greatest Rugby matches of recent times, Nigel is a wonderful choice of rugby speaker for any event with guests that seek to understand the spectacle of world-class sport witnessed from the very heart of the action.

In January 2012, Nigel boosted his popularity by addressing Treviso scrumhalf Tobias Botes after protesting with the words “This is not Soccer!” leading to fans of the sport praising him for his bold and quick witted control of the situation. As a rugby speaker, Nigel combines humour and anecdotal tales of his times refereeing decisive games as well as some of the funnier sides of the game the cameras do not always catch.

Nigel has also enjoyed a lucrative media career for channels such as S4C, featuring as a TV Presenter and contributor for shows including Jonathan and Bwrw’r Bar. Naturally funny, Nigel has gained a new demographic of fans away from the pitch and only added to his reputation as a formidable rugby speaker.

With a reputation that precedes him, Nigel Owens MBE is arguably one of the most famous referees in just rugby but sport in general. A hilarious figure that commands respect and has tremendous camaraderie amongst player and fans, the instantly recognisable Nigel Owens MBE is available to hire as a rugby speaker for any event, dinner or function where he presence coupled with his tales and anecdotes will ensure an unforgettable event for attendees.

When he’s at corporate events, Nigel is known to cover the following topics:

To book One of Rugby's Most Famous Referees, Nigel Owens MBE, as the rugby speaker for your corporate event, function or conference, simply contact the Champions Rugby Speakers agency by filling in our online contact form. Alternatively, call a booking agent directly on 0207 1010 553.