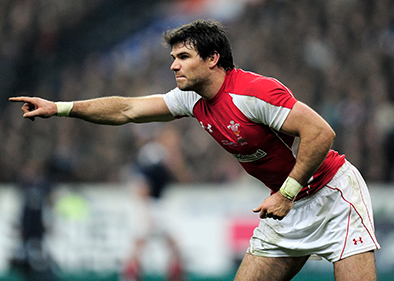 Most Capped Wales International Scrum-half Ever

Mike Phillips is a rugby union player and the most capped scrum-half for Wales with 76 caps. A typical tall and powerful scrum-half, Phillips has often been compared to ex-Wales international Terry Holmes.

Phillips made his first appearance for the Scarlets at just 20, after a frustrating time being in-and-out of the side continuously, Phillips moved to Cardiff Blues in 2005. Early 2007 saw another change in clubs for Phillips after he signed for the Ospreys, by this point he had established himself in Wales national side after making his debut in 2003.

His consistent performances for both club and country saw him feature in Wales’ 2006 Six Nations squad and their 2007 World Cup campaign. After a knee ligament injury, Phillips would leave Ospreys and join Bayonne; two years at Bayonne came to an end when he signed for Racing 92.

During this time he continued to establish himself as a Welsh national team player and soon became the most capped scrum-half for Wales. Phillips has always played at the highest level and has overcome many injuries and barriers throughout his career; this makes him a fantastic rugby speaker as he discusses overcoming challenges and having a successful career as a rugby player. He ended his career at Sale Sharks in the Aviva Premiership before retiring. In November 2017 Phillips came out of retirement to represent the Scarlets again, he has played one game for them since 2017 as a cover due to injuries in the squad.

Phillips is intriguing, funny and passionate about rugby which makes him the ideal rugby speaker for your upcoming event or function- he often discusses his career and overcoming challenges.

To book former Scarlets and Wales rugby player, Alan Quinlan, as the rugby speaker for your corporate event, function or conference, simply contact the Champions Rugby Speakers agency by filling in our online contact form. Alternatively, call a booking agent directly on 0207 1010 553.