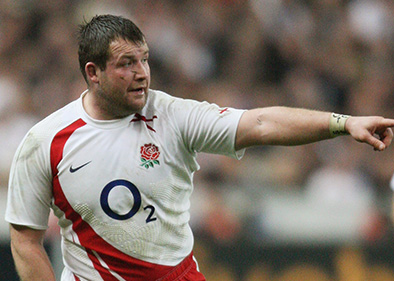 Motivational Rugby speaker Mark Regan MBE is a renowned rugby star and true character of the game. Playing as a hooker, Mark’s hard working and tenacious style allowed him in 1995 to be the first player to make an England debut against South Africa in the age of professional rugby. Just eight years later, Mark won the Rugby World Cup and was a finalist again in 2007. Mark retired from international rugby after victory over France in Paris, 2008 and has gone on to work extensively as a rugby speaker at events and functions across the UK where guests are forever seeking an insight into the historic, remarkable and unforgettable World Cup triumph.

Regan’s career saw him earn 46 international caps including capturing the William Webb Ellis Trophy, a truly respectable figure. A wonderful personality for events as a rugby speaker, Mark has addressed hundreds of audiences with his engaging anecdotal tales and invaluable advice learnt from a life in competition. Exceedingly popular due to his eloquent and esteemed presentation and speaking ability, Mark Regan regularly shares his tales with guests making for entertaining and fascinating content.

Mark motivates and inspires audiences with his renowned record of success, whilst with Bath Rugby Club between 1997 and 2002; he played 93 competitive matches and won the prestigious Heineken Cup in 1997. After leaving Bath, Mark enjoyed a stint at the Leeds Tykes where he helped to beat his old club in the Powergen Cup final. Mike finally moved to Bristol to play out the rest of his career, but not before he assisted the team’s effort to finish third in the Premiership. A highly decorated player, Mark is in constant demand as a rugby speaker, proving testament to his reputation as one of the most sought after figures on the after dinner speaker circuit.

A World Cup winner, Grand Slam winner, Triple Crown winner, Lions series winner and European Cup winner, Mark’s credentials speak for themselves. An incredibly decorated career and individual, Mark is brilliantly placed to breach the topics of peak performance and maximising success to ensure guests experience an incredibly informative event. Mark’s talks as an after dinner speaker are full of flair and always entertaining. His high quality communication skills make him a very popular guest at all sorts of functions. Corporate sectors frequently book Mark to gain an insight into what is needed to build success and enjoy winning.

Never to be a shy or retiring guest, Mark’s wonderful anecdotes and humorous style ensures he is a regular on the speaking circuit. Mark’s versatility makes him a perfect guest for golf days, private dinners and rugby coaching sessions. A highly talented and gifted individual that is the consummate professional and performer, Rugby World Cup winner, Mark Regan MBE is available to hire as a rugby speaker for events and functions across the UK where he is certain to motivate and inspire attendees to ensure an unforgettable experience.

When he’s at corporate events, Mark is known to cover the following topics: