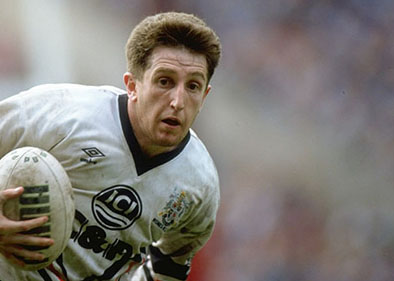 Jonathan Davies is a welsh dual-code rugby legend and instantly recognisable figure that is held in the highest regard within the game of rugby. Captaining his nation for both Rugby Union and Rugby League, Jonathan joined an elite club of players to ever accomplish this feat. A wonderful rugby speaker, Jonathan observed the transition of Rugby Union to a professional sport as well as playing alongside some of the most formidable athletes of the sport. These experiences along with those derived from his playing career have made Jonathon Davies an incredibly sought after and popular rugby speaker.

Beginning his career in Rugby Union, Jonathan developed his game at Trimsaran RFC before signing for Neath in 1982 to play at fly-half. After 35 games for the club, Jonathan got his break to play for his national side, scoring a try and a drop goal against England as well as being nominated the Man of the Match. The perfect start to his career, during his performances as a rugby speaker Jonathon Davies discusses what it was like to make his debut and the delight such a performance filled him with. Jonathan transferred to Llanelli in 1988 and played an important part of the Triple Crown success for Wales. With experience of victory of an international level, Jonathan is a highly desirable rugby speaker who delivers an insight into what it’s like to be the best in the world.

For the 1989 season, Davies made the bold decision to move to Rugby League and signed for Widnes. Whilst adapting to the sport and bulking up, Jonathan played at centre during the side’s 1989 World Cup Challenge victory against Canberra Raiders. In 1991, Jonathan challenged himself once more by playing for the Canterbury-Bankstown Bulldogs in Sydney. Jonathon Davies’ trait of continuing to challenge himself and strive for growth are fantastic qualities that could effectively be adopted by many, and after listening to Davies you will certainly be filled with the motivation and inspiration to do so.

After Widnes experienced financial difficulties in 1993, Davies moved to rivals Warrington and represented Great Britain for the last defeat of Australia at Old Wembley Stadium, scoring a lone try and picking up the Player of the Season award. Jonathan’s consistency over the season as well as his constant determination to achieve peak performance are two attributes that are relatable to business and social environments alike, making him a wonderful rugby speaker.

Jonathan moved back to Rugby Union in 1995 after the sport changed to a professional game. Signing for Cardiff RFC and continuing to play for his national side until 1997, Jonathon Davies eventually retired from the professional game in 1997. Following his retirement, Jonathan created an illustrious career in television and broadcasting as a TV Presenter thanks to his extensive technical knowledge learnt from a dual-code rugby career. This experience as a presenter and broadcaster have supported Davies’ capabilities as a rugby speaker.

Leading coverage for the BBC on both international and domestic games, Jonathan’s enthusiasm for the game is clearly evident and the invaluable insights he gives during match play has made him a household favourite TV Presenter. A wonderful after dinner speaker, Davies engages and interacts with audiences to create a compelling mixture of anecdotal tales and predictions for the sport. A legend of Welsh rugby that has both experienced and flourished in both codes of the game, the distinguished and illustrious Jonathon Davies is able to hire as a rugby speaker for any event, dinner or function.

When he’s at corporate events, Jonathon is known to cover the following topics:

To book BBC Commentator & Rugby Legend, Craig Chalmers, as the rugby speaker for your corporate event, function or conference, simply contact the Champions Rugby Speakers agency by filling in our online contact form. Alternatively, call a booking agent directly on 0207 1010 553.