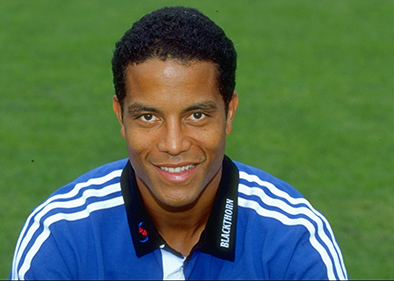 Former Bath, England and British & Irish Lions legend, Jeremy Guscott is a rugby legend that enjoyed an illustrious career at the cutting edge of the sport. Known for his fluid running style, Jeremy was considered as one of the greatest ball carriers the game has ever seen. An eloquent rugby speaker, Jeremy delivers after dinner speeches that focus on achieving goals and maximising success, two traits that are applicable to both personal and corporate environments.

Beginning his domestic club career at Bath in 1984, Jeremy recorded 266 caps and 710 points in the 16 years he spent with the squad. In 1989, Jeremy made his international debut against Romania, scoring a hat trick of tries in a 58-3 win over their competitors.

An electrifying performer that often had viewers on the edge of their seats and able to produce sheer brilliance at any time, Jeremy Guscott is equally able to captivate guests and audiences during his work as a rugby speaker just as he did as a player.

Jeremy also received the call up to the Lions tour, travelling to New Zealand in 1993 to play in all three tests. As a rugby speaker, Jeremy relates to audiences the drive and determination needed in order to remain one of the very best rugby players in the world. Guscott also expertly tailors his speeches specifically to certain audiences ensuring he is relevant and accommodating to the specific requirements of that occasion.

Guscott once again toured with the Lions in 1997 tour to South Africa, where he scored a memorable drop goal in the decisive second test. Jeremy’s final match in England colours was against Tonga in a 1999 Rugby World Cup pool match at Twickenham, where he scored an interception try by running the length of the pitch. In all, Jeremy represented his nation in three World Cups and enjoyed playing for his nation 65 times, scoring 143 points. As a rugby speaker, Jeremy can deliver anecdotal tales of his time as one of England’s finest players, as well as just how formidable some of his opponents were.

Since retiring from the sport in 2000, Jeremy has created a highly successful punditry, broadcasting and TV presenter career. Working for the BBC on the Six Nations, Rugby Special and Scrum V, Jeremy’s extensive knowledge of the game and articulate descriptions under pressure make him a highly desirable TV presenter. Speaking with a wealth of wisdom and expertise derived from vast experiences as a player, Guscott is a fan favourite and whether he is speaking in his capacity as a broadcaster or rugby speaker he is met with utter respect.

An instantly recognisable figure that has enjoyed an incredibly illustrious and decorated career within the game of rugby, Jeremy Guscott is a highly sought after and demanded rugby speaker and is available to hire for any event, dinner or function where his presence is certain to raise the prestige and glamour of any occasion.

When he’s at corporate events, Jeremy is known to cover the following topics: