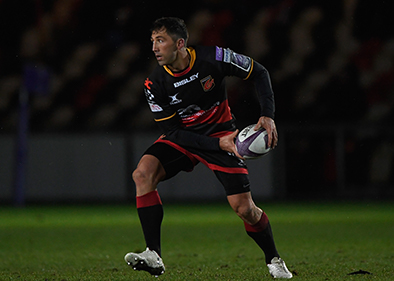 Gavin Henson is a Welsh rugby union player who has represented a number of top domestic clubs throughout his career. He currently plays for Dragons in the Pro14. Henson has earnt himself a total of 33 appearances for Wales where he has played as inside centre, fly-half and fullback.

His senior career began at Llanelli where he made only one appearance before moving to Swansea. He enjoyed a very successful start to his career when he earnt himself a call up to the Welsh national side in 2001, he made his debut in a Test against Japan. After three years at Swansea, he moved to domestic giants, the Ospreys, where he would play for six years.

During Henson’s time at the Ospreys, he cemented his place as a regular in the Wales side, his career continued to grow and develop as he represented a number of other clubs including giants Bath and Cardiff Blues. Henson has enjoyed a successful rugby career but has more recently been popular in the media.

Since September 2010, Henson has participated in three reality TV series, these include; 71 Degrees North, Strictly Come Dancing and The Bachelor. A fascinating rugby career now accompanied by a reality TV career means Gavin Henson is the perfect speaker for your upcoming event.

As a rugby speaker, he reflects on his successful career, as well as his injuries which tarnished him throughout a number of seasons. Within the media, Henson has shown off his bubbly and witty personality which makes him the ideal speaker for any type of event or function.

As a rugby speaker, Henson discusses the following topics:

To book former Ospreys and Wales rugby player, Gavin Henson, as the rugby speaker for your corporate event, function or conference, simply contact the Champions Rugby Speakers agency by filling in our online contact form. Alternatively, call a booking agent directly on 0207 1010 553.