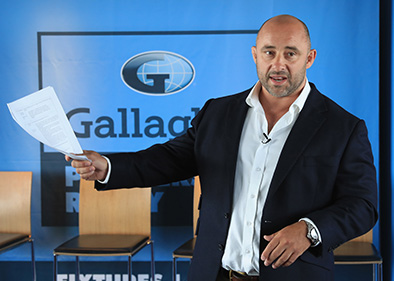 David Flatman or ‘Flats’ as he is often referred to is a former English rugby player turned that is best known for his exploits as a prop forward for Bath and the England national rugby union team. An incredibly successful pundit and analyst, Flatman’s commentary has led to his popularity growing further making him an instantly recognisable and regularly sought after rugby speaker. Receiving 8 caps for England during his playing career, Flatman has also worked as Head of Communications at Bath Rugby alongside his punditry where in 2016 the Daily Telegraph named him as the fifth best sports pundit on British TV. A charming and charismatic individual, David Flatman works extensively around the nation as a rugby speaker sharing his vast knowledge and experiences to provide thoroughly informative and entertaining events.

David started playing rugby union at the age of eight at his local club, Maidstone where he was inspired by his father who was a prop. A product of Dulwich College, Flatman appeared in the same England Schools squad as Steve Borthwick, Andrew Sheridan , Alex Sanderson, Mike Tindall and Jonny Wilkinson. Touring Australia with England Schools in 1997 with teammates that would go on to become greats of the game, the following year he went to Argentina with the England Colts as his progression and growth as a player and person continued to develop. Flatman also represented London & South-West and England Under-21s against South Africa in the autumn of 1998. Working as a rugby speaker David discusses his childhood and emergence into the game along with providing a fascinating insight into the likes of Wilkinson and Tindall at a young age.

His senior club rugby began with Saracens in 1998 and he won his first full international caps as a replacement in the Tests against South Africa on the summer tour in 2000, when he also appeared in the matches against North-West Leopards and Gauteng Falcons. Going on a second tour with the England side to North America in the summer of 2001, Flatman this time appeared as a replacement for Graham Rowntree in the Burnaby and San Francisco Tests against Canada and the United States respectively. He had a wealth of A team experience having been a regular in the side since making his debut against France and regularly shares the journey and challenge on breaking through into the England team as well as managing the disappointments when he occasionally missed out.

A sequence of seven England A team games where he excelled led to him being recalled to the senior squad for the final test of the 2000–1 season against France at Twickenham. He eventually decided to move to Bath in 2003, where he proved himself to be one of the finest front row forwards in English rugby union with his stellar performances in a revamped Bath Rugby pack. Flatman announced his retirement from rugby in June 2012 and ended his career with eight England Caps in addition to 168 domestic caps. Following the end of his playing career, Flatman was appointed as the Head of Communications at Bath Rugby for two years before he left this role in 2014 to concentrate on punditry and work as a rugby speaker.

A pundit for Channel 5, ITV & BT Sport, David Flatman often works alongside Mark Durden-Smith and Austin Healey and is regarded for his humorous and informative rugby podcast with his former Saracens teammate Tom Shanklin, called Flats and Shanks. An impressive performer and fierce competitor that has excelled in his role as a pundit, David Flatman is available to hire as a rugby speaker for any event, dinner or function.

When he’s at corporate events, David is known to cover the following topics: