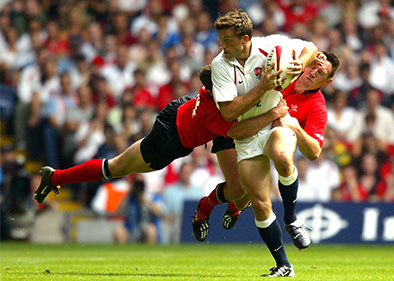 Dan Luger MBE is a former English rugby union international who was a member of the squad that unforgettably won the 2003 Rugby World Cup. Dan Luger played top flight rugby as a left or right wing for a number of England Premiership clubs from 1994 to 2003 namely Harlequins. He began as a junior at Richmond graduating to the senior XV before his twentieth birthday. a member of the 'Champions for Peace' club, a group of 54 famous elite athletes committed to serving peace in the world through sport, Luger has also taken part in British Bobsleigh Championships in addition to his extensive and successful work as a rugby speaker where he appears at events and functions across the UK.

Following the professional demise of Richmond, a season at Orrell followed where he was first selected for the national team at U-21 level. His blistering pace could not stop Orrell being relegated that season but gained the attention of scouts and teams across the nation and he moved onto his first spell at Harlequins where he prospered earning the first of his full caps. Suffering a series of injuries, Dan Luger was released by Harlequins at the conclusion of the 1998-99 season and this partcilary challenging period of his career is often discussed during his work as a rugby speaker as he shares the drive, determination and resilience that was required to comeback and flourish from this early setback.

He joined London rivals Saracens for two injury hit seasons before returning to Harlequins where he went on to become a regular with the national team. In 2003 he began a three season stint with USA Perpignan in French Catalonia. On leaving Perpignan he played for RC Toulon and Rugby Nice Côte d’Azur allowing him to provide a fascinating insight into French rugby during his work as a rugby speaker.

In November 2000, Luger scored a famous last minute match-winning try in an England versus Australia match and regularly reminisces on this wonderful moment during his performances as a rugby speaker. During the 2001 British and Irish Lions tour to Australia, Luger scored a hat-trick of tries in the opening match against Western Australia. However, an injury ended his tour, when he fractured a cheekbone in a training accident. This injury was a devastating blow to Dan Luger as he was embarking upon the pinnacle of his career however he recovered to continue his prominence and shares his journey while working as a rugby speaker.

A try from Luger topped the 42-6 Grand Slam victory over Ireland at Lansdowne Road back in April 2003 and he was again on the score sheet in August when he touched down in England’s 43-9 humbling of Wales at the Millennium Stadium during the World Cup warm-up matches. He came on as an illegal substitute during the England-Samoa game at the 2003 Rugby World Cup, leading to dispute over whether England should be fined or perhaps even docked points as a penalty for having sixteen players on the field for a short period of time. Following this incident he struggled for form during the World Cup in 2003 and has not been selected since for the national side although he was also a notable England Sevens player playing at international level for a number of years to 2006.

Playing for 8 different domestic teams in addition to England and the British and Irish Lions, Dan Luger MBE has a wealth of knowledge and experiences to share with guests and audiences during his work as a rugby speaker. A Rugby World Cup winner who made a tremendous impact in an England shirt, Dan Luger MBE is available to hire as a rugby speaker for any event, dinner or function where he is certain to mesmerise and entertain guests at any occasion.

When he’s at corporate events, Dan is known to cover the following topics: