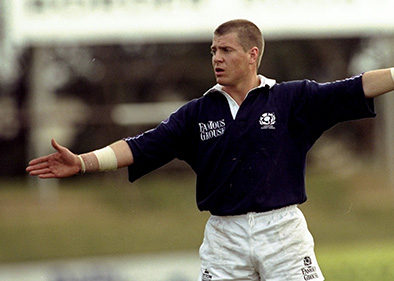 Craig Chalmers is a former Scottish Rugby Union international who represented his nation on 60 occasions over the course of a professional career that spanned over a decade including a solitary appearance for the British and Irish Lions. A fly-half and centre, noted for his tactical kicking, as well as game management. Chalmers was also recognised for being a solid tackler – something that fly-halves were not noted for in the amateur days of rugby. Somewhat of a club stalwart for Melrose, Chalmers is also a backs coach at Esher RFC. A hugely popular figure and personality in particularly in Scotland it is no surprise that Craig Chalmers is also an extremely sought after rugby speaker and host for a range of events across the UK.

Representing Scotland as well as the British and Irish Lions at international level, Chalmers was capped 60 times for Scotland predominantly playing as a fly-half but on occasion at the centre as well as also playing as a substitute on the right wing showcasing his tremendous versatility. Alongside his extensive and prolific services for Melrose, Craig Chalmers also represented Worcester Warriors, Harlequins, and the Pertemps Bees allowing him to provide a fantastic overview of domestic rugby and the requirements to succeed at a professional level.

Ending his playing career in March of 2005 as captain and player-coach with Melrose, Craig join Chinnor RFC as head coach only to resign before taking charge of a single match and citing "personal reasons" for the decision. He did however go on to join Esher Rugby as a backs coach for their senior team in August 2013 where he remains. These coaching exploits allow Chalmers to provide a fascinating insight into rugby from the perspective of a coach which makes for insightful content during his work as a rugby speaker.

The brother of Paula Chalmers played for the Scottish Women's rugby team and achieved an even higher number of caps, Craig is remembered within Scotland for the country’s historic and quite remarkable Grand Slam against England. During the memorable game, Chalmers secured three penalties against the fierce rivals which contributed greatly to the eventual result much to the joy of his nation. In total, Chalmers started every game for Scotland’s campaign, contributing thirty-three points overall and ending the tournament with what will remain a huge career highlight that he regularly shares and discusses with great delight during his performances as a rugby speaker.

A brilliant motivational speaker, Craig Chalmers is definitely not short of experience. Through an extensive career of success and failure, Chalmers has dedicated his life to Rugby and garnered a host of entertaining, insightful and exhilarating tales and anecdotes to shares at events. Through pure commitment and sheer determination, Chalmers is a memorable and still respected former player. A true gentleman and consummate professional, Craig Chalmers is available to hire as a rugby speaker or host for any event, dinner or function across the UK where he is certain to be a fantastic addition to any occasion.

When he’s at corporate events, Craig is known to cover the following topics:

To book Former Scottish Rugby player, Craig Chalmers, as the rugby speaker for your corporate event, function or conference, simply contact the Champions Rugby Speakers agency by filling in our online contact form. Alternatively, call a booking agent directly on 0207 1010 553.