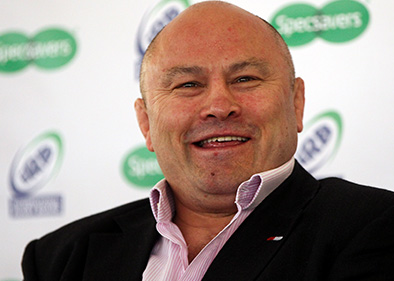 Brian Moore is an instantly recognisable and incredibly popular figure in the world of Rugby Union. A former British and Irish Lions player that represented England on 64 occasions, since his retirement the hooker has gone on to become an extremely well respected and prominent presenter and pundit for BBC Sport and Talksport. A man of great talents, Moore is also a qualified referee and highly sought after rugby speaker. Winner of the 2010 William Hill Sports Book of the Year and Best Autobiography award at the British Sports Book Awards award, Brian Moore has a remarkably impressive résumé which bolster his credentials as a fantastically talented and entertaining rugby speaker working at events and engagements across the nation.

Moore began his career playing as an amateur senior for Nottingham Rugby Club, the club where he would go on to make a name for himself. During his time at Nottingham, Brian Moore won his first International cap for England and also toured Australia with the British and Irish Lions. Moore represented England, winning a total of 64 England caps between 1987 and 1995 making him the 13th most-capped Englishman. Renowned for his fondness of Shakespeare in the dressing room before the game, Moore regularly discusses this ritual during his work as a rugby speaker. Playing in three Rugby World Cup campaigns including in 1991 where along with Jason Leonard and Jeff Probyn he was part of a destructive English front row as they reached the final, losing a tight match 12–6 to Australia at Twickenham. This fantastic tournament that culminated in devastation is reflected upon passionately by Brian Moore during his work as a rugby speaker.

Moore did also experience many wonderful experiences during his career as he was a member of the England side which won Grand Slam in 1991, 1992 and 1995. In 1991, he was voted Rugby World Player of the Year highlighting his tremendous ability and consistently prolific performances that made him such an important performer for England. Brian Moore also went on two British and Irish Lions tours, winning five prestigious test caps. In Australia in 1989, Moore was a part of the Lions team that won the series 2–1 and Moore was famously caught celebrating the morning after on Sydney Harbour Bridge, doing aeroplane impressions. These celebrations were met with hilarity by the nation and his account of the events produce arguably and even more hysterical reactions from his guests at events where he is the rugby speaker or host.

During his career Brian Moore also moved to London to train as a solicitor and played for Harlequins and eventually ended his club career at Richmond. He was awarded an honorary Doctorate in Law on 14 July, 2010 but concentrated his efforts on remaining in rugby and has gone on to become one of the most popular pundit and analysts in the game. Incredibly popular amongst views and fans, Moore is renowned for his harsh criticism and abrupt analysis as he rarely minces his words during his commentary work for BBC providing a wonderfully passionate experience for fans. His Six Nations broadcasting as part of the overall BBC coverage was shortlisted in the Sport category of the 2011 BAFTA Television Awards and these tremendous performances led to Moore covering the 2011 Rugby World Cup for TalkSport Radio as lead co-commentator and further bolstering his popularity and credentials as a sought after rugby speaker.

An intellect and visionary, Moore also writes on rugby with a Monday column for the Daily Telegraph and was shortlisted for Sports Journalist of the Year in the 2009 British Press Awards. Having moved to work for The Sun for a number of years, Moore has also been on various television shows such as QuestionTime along with continuing to gain huge praise for his award winning book, Beware of the Dog. A fantastic player and pundit who has mesmerised the nation with his ability on and off the pitch, Brian Moore is equally as fantastic as a rugby speaker and he is available to hire for any event, function or dinner to share his tremendous tales, anecdotes and experiences from a truly glittering career.

When he’s at corporate events, Brian is known to cover the following topics: