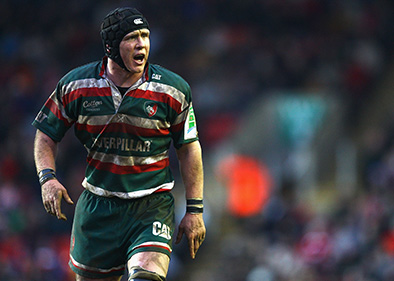 Ben Woods is a former professional rugby player who is best known for representing the Newcastle Falcons and the Leicester Tigers as a flanker during a career that spanned over almost a decade. The former Leicester Tigers captain and England Saxons player has worked extensively as a coach following his retirement helping to develop the bright stars of the future alongside running his rugby agency, Legion Sports along with fellow player Leon Lloyd. Woods has also gone on to develop quite the reputation as a rugby speaker and is often requested at events and functions across the nation and in particularly by rugby clubs in Leicester and Newcastle where he formerly plied his trade as a player.

Having been given his first opportunity in professional rugby by Newcastle Falcons in 2003 aged just 19 following his time at Durham University however his career was almost over before it began. Ben Woods suffered a badly broken leg at the end of his first season and as a result was side-lined for 18 months with doctors advising him to focus on walking again as appose to playing. A devastating prospect in the infancy of his career, Ben Woods discusses the psychological and physical battle he faced and overcame to build a successful career during his work as a rugby speaker. Returning to full fitness, Woods earnt a place in the Newcastle Falcons first team as well as gaining International recognition through his selections for England U21s and the England Saxons for the 2006 Churchill Cup, an experience that he will forever treasure and one he shares while performing as a rugby speaker.

Representing the Saxons once again the following year, Woods left Newcastle to join the Leicester Tigers in search of greater challenge and the opportunity to compete in European rugby and win domestic silverware as well as giving him the best possible chance to enhance his skills and International recognition. Playing 23 games in his first season with the club, Ben Woods did not have to wait long to play in the sort of games he dreamt of when joining the Tigers and he flourished scoring a decisive try in the 2009 Heineken Cup final. Despite suffering a major injury in every one of his four seasons at Welford Road, Kay played many crucial roles within the side and was a part of Premiership winning campaigns as well as leading the club to the LV Cup which he passionately reminisces upon during his work as a rugby speaker showcasing his obvious pride and delight at the accomplishment.

Woods eventually called time on his career in 2012 after playing the final two years of his career with an injured wrist that hampered his ability to perform at the level he wished and after the need for yet another operation the surgeon intervened to say enough was enough ending his career at the mere age of 29. An abrupt and early ending to his career, Ben Woods has gone on to excel in the world of coaching and agency as well as completing a law conversion degree at university. An incredible story of grit and determination from one of the true gentlemen of the game, the truly inspirational Ben Woods is available to hire as a rugby speaker or host for any event, dinner or function across the nation.