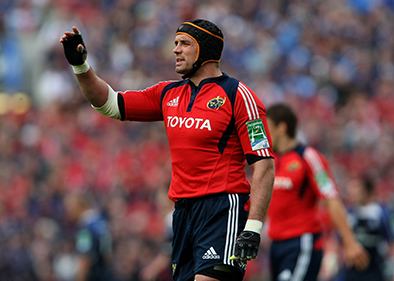 Alan Quinlan is a retired Irish rugby union player. He played as a Back-Row for Munster throughout his career, he has been recognised as a Munster legend. After a successful youth career which saw him captain the Irish Youth Team, Quinlan would go on to sign for Munster in 1996.

Quinlan soon became a regular in the first team and it wasn’t long before he was called up to the Irish national team in 1999. He would eventually go on to play 27 times for Ireland which included games in the Six Nations and Rugby World Cup.

His career was slightly hampered by injury but he made a successful comeback in 2006, after a significant cruciate ligament injury. In the same season he would help his amateur team, Shannon, to League 1 Division Title; he would also play a part in Munster’s Heineken Cup winning final against Biarritz.

He enjoyed a very successful career at Munster and won a number of historic titles including the Heineken Cup; in 2010 Quinlan became Munster’s most-capped player of all time. Quinlan’s international career ended in 2008 after the Autumn Internationals against Canada and the All Blacks.

Quinlan spent his whole 15-year professional career at Munster before announcing his retirement from the game in 2011. As a rugby speaker, Quinlan often speaks about loyalty and dedication, as well as perseverance and determination.

Since retiring, Quinlan has begun a career as a media analyst, MC and Journalist. He also features as a rugby speaker and is a well-sought after speaker due to his notorious, wonderful personality and attitude towards life as a whole. Quinlan is also able to reflect and speak on mental health which makes him an extremely well-respected speaker.

As a rugby speaker, Alan Quinlan will often discuss the following topics:

To book former Munster rugby player, Alan Quinlan, as the rugby speaker for your corporate event, function or conference, simply contact the Champions Rugby Speakers agency by filling in our online contact form. Alternatively, call a booking agent directly on 0207 1010 553.