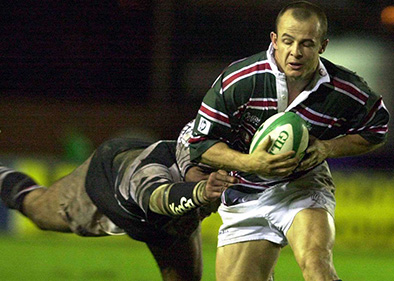 Richard Parks is a former professional rugby player and rugby speaker, who has gone on to be the first explorer to reach the summit of the highest peak in each of the continents, as well as trekking to the North and South poles. A popular and highly sought after rugby speaker and motivational speaker, Richard captivates the audience by delving into his story.

A promising professional career cut short by a horrific injury, Parks left his former promising playing career behind. Battling through depression, he sought a new challenge to regain structure and excitement within his life. Taking up climbing as a past time, it’s something which quickly escalated to inspire Richard onto his biggest challenge yet– the 737 Challenge.

Not for the faint hearted, the 737 Challenge involved climbing the Seven highest mountains throughout the world, as well as the three ‘poles’, North, South and Everest, in under seven months. Completing this gruelling challenge in six months, he set a new world record in the process.

A truly phenomenal teamwork and motivational speaker, Richard is available as an event guest who can divulge into his previous world as an after dinner speaker. Overcoming adversity to undertake a new challenge and inspire others to never let anything stand in your way, the addition of Richard Parks as a motivational speaker for your event or occasion is one that has proven exceptionally popular. An articulate and fluid motivational rugby speaker, Richard Parks is a truly inspirational individual, ideal as an rugby speaker at a range of events, occasions and conferences.