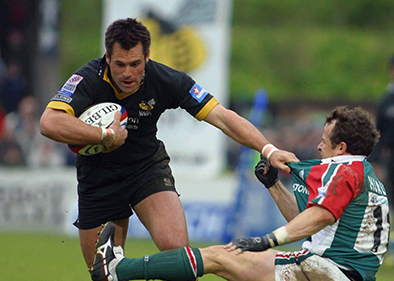 Kenny Logan is a retired Scottish rugby union player who enjoyed success at a number of domestic clubs, including the London Wasps. Logan played at wing and enjoyed high-scoring seasons wherever he played.

His professional career started at Glasgow in 1996, he scored 31 points in 5 appearances for the club before moving to English side the London Wasps in 1997. Logan played the majority of his domestic career at the Wasps before returning to Glasgow in 2004. During his time with the English club, he made 115 appearances and scored an incredible 862 points. He enjoyed a very successful period with the club and will forever remain as one of the greatest players at the club.

At just 19, Logan made his international debut for Scotland in a match against Australia. Logan couldn’t quite cement a regular place in the international side until the 1995 Five Nations. Logan became a regular in the squad during this tournament and for the foreseeable future was one of the first names on the fifteen man teamsheet. He played in the 2003 Rugby World Cup before retiring from international rugby later on that season. He ended his international career with 70 caps for Scotland, as well as an astonishing 220 points. He continued to play for Glasgow until he retired from domestic rugby in 2005.

Outside of rugby, Logan has taken part in BBC series Strictly Come Dancing, he came fifth on the show. Logan has spent a lot of time, alongside his wife, in raising money for charities. As a rugby speaker, Logan can discuss his career but also enjoys discussing charity work, overcoming challenges and maximising success. He has an outgoing personality and provides lots of humour for corporate events and functions.

To book Former London Wasps and Scotland player, Kenny Logan, as the rugby speaker for your corporate event, function or conference, simply contact the Champions Rugby Speakers agency by filling in our online contact form. Alternatively, call a booking agent directly on 0207 1010 553.