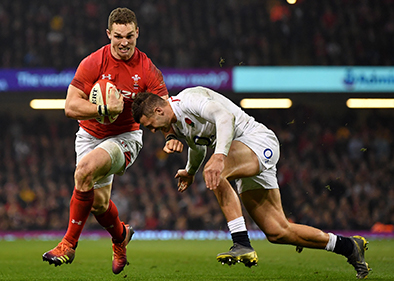 George North is a current Welsh rugby union player, he plays for domestic side the Ospreys in the Pro 14 league. North typically plays at wing but has also enjoyed time playing at outside centre. North started his senior career in 2010 for Llandovery before moving to the Scarlets in the same year, he played 41 times for the Scarlets until moving to English giants, Northampton Saints.

North was a part of Northampton’s Premiership winning side in 2014. They beat the Saracens in the final after one of the most dramatic Premiership games in history. The Saints scored a try in the last minute of extra time to be crowned champions. North enjoyed a very successful 5 years with the club before moving to the Ospreys in 2018, since joining the club he has played an influential role in a number of games and is a regular in the first team.

He played in his first World Cup in 2011 and played an integral part in the nations run to the semi-finals. In 2012, North was a key member in Wales’ Six Nations winning side, he played in all 5 games as Wales won their first Grand Slam since 2008. The year after saw Wales win the Six Nations again as they regained the title for the first time since 1979.

His career has continued to grow and develop, he is a regular both domestically and internationally. North is recognised as one of Wales best players and plays an integral part in all matches. North has also represented the British and Irish Lions on 3 occasions. As a rugby speaker, North often discusses his ongoing career, as well as being under the spotlight and how to perform in pressure situations.

As a rugby speaker, North often discusses these topics:

To book current Ospreys and Wales rugby player, George North, as the rugby speaker for your corporate event, function or conference, simply contact the Champions Rugby Speakers agency by filling in our online contact form. Alternatively, call a booking agent directly on 0207 1010 553.