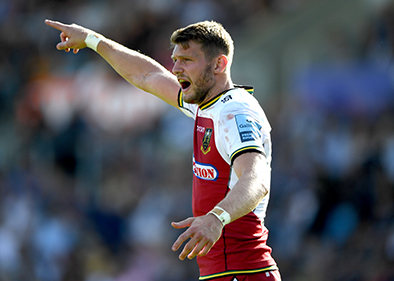 Dan Biggar is a Welsh international rugby player who currently plays for the Northampton Saints in England. Biggar became the youngest player to reach 100 games for the Ospreys and eventually played 210 times for the Welsh club. Biggar plays at fly-half or scrum-half for both club and country.

After a successful start to his career at Swansea, he was selected for the Wales squad and made his debut at 19. He moved to the Ospreys in 2007 and played there for 11 years, he scored the winning conversion in the 2012 Pro12 Grand Final. Biggar played a crucial role in Wales’ victorious 2013 Six Nations campaign where he started all five games at fly-half. His spectacular Six Nations campaign was topped off by scoring a conversion, penalty and drop goal in the Championship game against England.

Biggar continued to put in world-class performances for both club and country and regularly scored a high amount of points in games. In the 2015 Six Nations, Biggar played a vital role in all of the nation's matches and scored his first Welsh try against France. Later on that year, Biggar played in the World Cup and took over kicking duties for the nation. Biggar kicked 56 points during the tournament, including 23 points in Wales’ 28-25 win over England; this match saw Biggar awarded the accolade of Man of the Match, a huge achievement in a World Cup game.

When at events or functions, Biggar often discusses:

To book current Northampton Saints and Wales player, Dan Biggar, as the rugby speaker for your corporate event, function or conference, simply contact the Champions Rugby Speakers agency by filling in our online contact form. Alternatively, call a booking agent directly on 0207 1010 553.