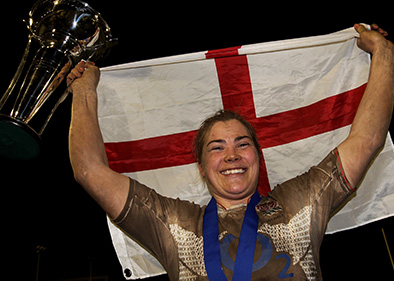 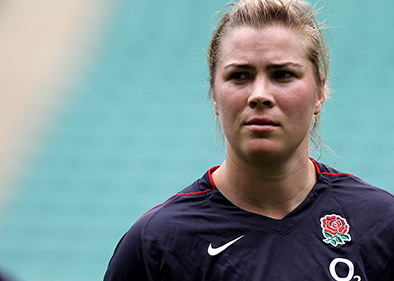 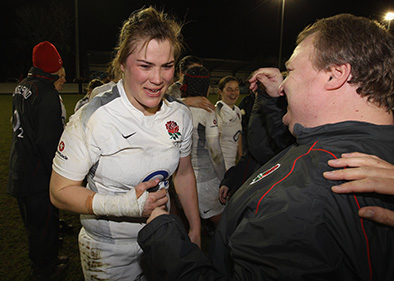 Catherine Spencer is a former captain of the England Women’s rugby team, leading the players at the 2010 Women’s World Cup in England. A highly respected and well-known figure within the rugby world, Catherine has written articles for a number of leading publications including The Independent, Sports International Magazine and The Sunday Times as well as rugby specific publications such as The Rugby Paper and Scrumqueens website. A fantastic performer that most certainly left her mark on women’s rugby and the game in general, Spencer played in two Women’s Rugby World Cup campaigns as well as playing in 8 Six Nations tournaments which yielded 6 wins and a spectacular 5 Grand Slams. An inspiring individual who has motivated and empowered who has impacted women and children across the nation, Catherine Spencer is a highly sought after rugby speaker across the nation appearing at a host of events and dinners.

During her 12 years of elite level playing experience, Catherine Spencer collected a highly commendable 63 caps for her country from 2004 to 2011. In this time, she played in two Rugby World Cup finals but unfortunately lost out to New Zealand on both occasions. So close to glory and the coveted trophy, Spencer speaks of the pressures and big stage of finals during her performances as a rugby speaker while sharing the disappointment of the results. Scoring 18 tries for England during the course of her career, Spencer was presented with the England Player of the Year award in 2006 and in 2011 went on to receive the Rugby Writers Club Special Award. Playing for Worcester, Bristol and Aylesford Bulls Ladies before retiring from playing rugby, Catherine Spencer eloquently discusses her time in domestic rugby as well as expanding upon the growth of the women’s game during her work as a rugby speaker.

After retiring from International rugby after a sixth successive Six Nations Championship win in 2011, Catherine has continued to be a patron of the Tag Rugby Trust which coaches and introduces the sport to underprivileged children in developing countries across the world, a role she has held since 2007. A huge advocate of giving back and developing both humanity and the game of rugby, in 2014 Catherine Spencer launched Inspiring Women, a speaker and mentoring agency which uses female speakers who have a background in sports or adventure to motivate and inspire women around the world. Alongside her charitable endeavours, Catherine is also a regular commentator and studio pundit for Sky Sports and the BBC and is also a popular figure on the after-dinner speaking circuit where he specialises as a rugby speaker.

With a number of years of top-level playing experience, Catherine Spencer talks openly about her love and passion for rugby, the growth of the female game and her achievements as England captain. Providing a great balance between the serious and emotional moments of her rugby journey with a number of light-hearted anecdotes, Catherine is sure to have your audience captivated and inspired leaving a lasting impression and impact upon guests at any event. An incredibly inspiring figure, Catherine Spencer is available to hire as a rugby speaker for any event, dinner or function where she is certain to be a fantastic addition to any occasion.

When he’s at corporate events, Catherine is known to cover the following topics:

To book Former England Women's Captain, Catherine Spencer, as the rugby speaker for your corporate event, function or conference, simply contact the Champions Rugby Speakers agency by filling in our online contact form. Alternatively, call a booking agent directly on 0207 1010 553.