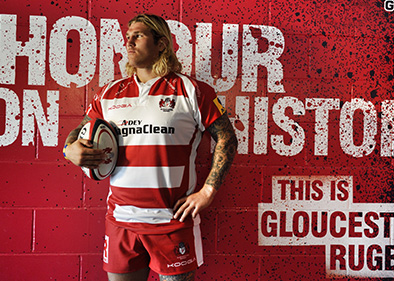 A Welsh international rugby star, Richard Hibbard is one of the most accomplished Rugby Union players of his time. A stalwart figure for both The Ospreys and Wales International sides, Richard has played his part in some of the most memorable games of the modern era. An ideal rugby speaker for events and corporate functions, Hibbard is a consummate professional who has entertained hundreds of audiences with his after dinner speeches An instantly recognisable and sought after rugby player and speaker largely thanks to his long blonde locks, Hibbard continues to enjoy a fruitful career as a hooker alongside his ever increasing work as a rugby speaker across the UK.

Playing his rugby locally from a young age, Richard represented a number of teams around the town of Port Talbot before moving on to play at a senior level for Taibach, Aberavon, Swansea and the Ospreys. Attaining his first cap for Wales in 2006, Richard’s impressive performances for his club and nation ever since have proven that he is one of the most skilled and revered Rugby players in both national and international rugby. As a rugby speaker, Richard Hibbard discusses his experiences in the domestic game recounting memorable fixtures along with reminiscing upon the foundations of his career which began with local clubs and teams.

Named as part of the 2013 British & Irish Lions squad, Richard impressed once more with strong leadership and continuous exhibitions and strength, fitness and explosive power. As a rugby speaker, Richard delivers invaluable advice about reaching peak performance and achieving goals in life, two attributes applicable to both business and social environments alike. A fantastic achievement for any British player to be selected in the prestigious Lions team, Hibbard’s honour and delight at representing the historic team shines through during his performances as a rugby speaker as do hilarious and insightful tales and anecdotes garnered from his unforgettable experiences.

Having previously played a little bit of Rugby League, Hibbard has also represented Wales A in Rugby League allowing him to discuss both codes of the game during his work as a rugby speaker. Still very much in the prime of his career, Hibbard recently signed a three year contract with the Dragons and highlights the ambitions and goals he has for the remainder of his career. An incredibly driven player and fierce competitor, Richard Hibbard provides a fascinating insight into the mindset of high performer and champion player.

A consummate professional that is the epitome of a gentleman, the engaging and approachable Richard Hibbard is available to hire as a rugby speaker for events, functions and dinners across England and Wales where he remains incredibly popular and often appears at clubs functions where he previously played. The addition of Richard Hibbard as a rugby speaker at any occasion is certain to be a hit with all guests and attendees.

To book Welsh International Rugby Player, Richard Hibbard, as the rugby speaker for your corporate event, function or conference, simply contact the Champions Rugby Speakers agency by filling in our online contact form. Alternatively, call a booking agent directly on 0207 1010 553.