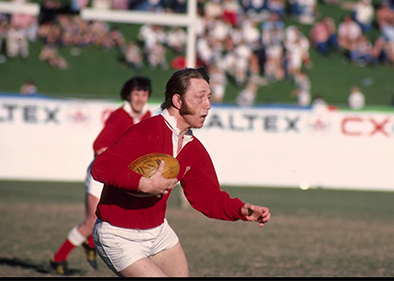 John Peter Rhys Williams, also known as JPR Williams, is a former rugby union player who represented Wales during the 1970s. Playing at fullback and flanker, Williams was recognised for his high-tempo, aggressive style of play. As well as being an extremely talented rugby player, Williams is also an orthopaedic surgeon by profession.

In 1969, aged 19, Williams made his debut for Wales. He enjoyed an extremely successful international career and eventually earnt 55 caps for the country, including 5 as captain. The majority of his domestic career was played for London Welsh, Bridgend and Tondu.

Williams was a part of a select few Welsh players that won 3 Grand Slams between 1971 and 1978, all 3 Grand Slams included famous names such as Gareth Edwards, Alun Wyn Jones and Gethin Jenkins. One of Williams’ most recognisable feats was his incredible record in Test Matches v England, he would play 10 tests against England and he was never on the losing side.

Williams decided to not be a part of the 1977 British Lions tour to New Zealand after being advised to focus on his medical career. He was also appointed MBE for his services to rugby in 1977, making it an extremely memorable year in his life. Williams eventually retired from international rugby in 1981 and continued his career as an orthopaedic surgeon. Williams is clever, humorous and charitable which gives him all the requirements to be a successful rugby speaker. In 2006 he climbed Mount Kilimanjaro for charity and helped to raise more than £200,000 for the NSPCC’s ‘Full Stop’ Campaign.

As a rugby speaker, Williams discusses his career, as well as sporting success, adaptability and teamwork. Williams can also discuss his medical career and overcoming challenges of retiring as a sportsman to pursue his medical career.

As an after dinner rugby speaker, Williams often discusses:

To book Former London Welsh and Wales player, JPR Williams, as the rugby speaker for your corporate event, function or conference, simply contact the Champions Rugby Speakers agency by filling in our online contact form. Alternatively, call a booking agent directly on 0207 1010 553.