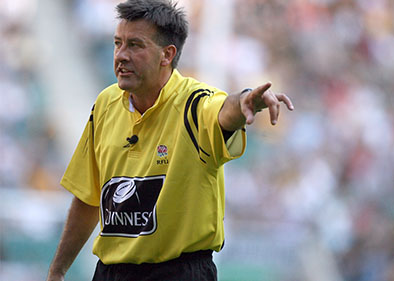 Ashley Rowden is one of the most renowned and well respected Rugby Union referee’s to have ever officiated the game. Based in Berkshire, Ashley has a wealth of experience as a referee sending over 90 players to the sin-bin in addition to officiating over 150 Premiership matches during his illustrious career. A personality and figure that commands the utmost respect on the pitch, Rowden’s presence is equally as sought after in the after dinner speaking world where he is an incredibly demanded rugby speaker touring the UK with tales and anecdotes from his career in the game.

Holding his first, albeit unofficial refereeing post aged just 13, Ashley Rowden immediately showed he was destined for a career in the game and has done just that going on to be become the longest serving referee in English Rugby Union history. Catching the refereeing bug from his father aged just 7, Rowden’s key values that he lives his life by are also the integral values that allow rugby to be such a wonderful game that personifies dignity, respect and gentlemanly conduct. Ashley Rowden’s work as a rugby speaker draws on more than a decade’s worth of experience and covers all manner of shocking and hilarious incidents.

Ashley has explained in previous sports speaker presentations that he bore witness to the moment when Scottish player and fellow rugby speaker Simon Fenn gruesomely lost part of his ear and broke records by being the first ref to send off both Neil Back and Martin Johnson in the same game which in itself is both a fascinating account and a truly unmissable story. These are just a few of the wonderful stories and experiences that Ashley Rowden is able to share with guests and audiences during his performances as a rugby speaker.

Thanks to his veteran status Ashley’s work as an after dinner speaker is always entertaining through his wealth of anecdotes to share with his audiences’ and offering intimate yet often unheard insight into the world of rugby union. As a rugby speaker, Ashley has toured up and down the UK and been employed by a number of high profile corporate clients, however he is especially fond of appearing at specialist sports events.

A truly entertaining performer, Ashley Rowden is available to hire as a rugby speaker, host or presenter at award ceremonies and dinners. An incredibly talented and charismatic figure, Rowden has also appeared at rugby union events and club functions for his local Berkshire team where he is as always a crowd favourite. To gain an invaluable and truly unforgettable insight into the world of Rugby Union through the eyes of a referee, look no further than the spectacular Ashley Rowden who is available to hire as a rugby speaker and certain to be the idyllic addition to any occasion.

When he’s at corporate events, Ashley is known to cover the following topics:

To book Iconic Rugby Union Referee, Ashley Rowden, as the rugby speaker for your corporate event, function or conference, simply contact the Champions Rugby Speakers agency by filling in our online contact form. Alternatively, call a booking agent directly on 0207 1010 553.