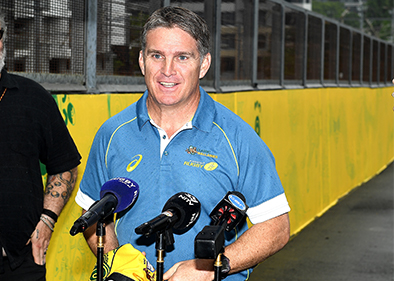 Tim Horan is a retired Australian rugby union player, he is one of only twenty dual Rugby World Cup winners. Playing at inside centre or fly-half, Horan was recognised as one of the greatest centres of his era.

He played for amateur side the Souths between 1989-2000 and Super Rugby club the Queensland Reds between 1996-2000. During his time at the Reds, Horan made 119 appearances scoring 285 points. Horan was influential for the Reds and was immediately a fan favourite, he built a great legacy with the club and is recognised as one of the best players of his era.

His debut for the Wallabies came against New Zealand, Horan impressed and soon received his second cap where he scored his first two Test tries in a match against France. He played a vital role in the 1991 World Cup winning squad, scoring 4 tries throughout the tournament. Horan had to overcome a severe injury which saw him out of rugby union for over a year, fortunately for Horan, he returned from injury in time to make the 1995 World Cup in South Africa.

1996 saw Horan captain the national side for the first time, this was an incredibly proud moment for Horan and he’ll remember it for the rest of his life. He played in his third World Cup in 1999, after overcoming food poisoning the night before the semi-final, Horan played a vital part in the 27-21 extra-time win against South Africa. Horan won his second World Cup after a victory over France in the final, he was voted player of the tournament and won a year’s worth of Guinness after scoring the fastest try. Horan played his final games for club and country in 2000 before having to retire due to recurring injuries.

Since retiring, Horan has become a rugby speaker and is the ideal speaker for your upcoming corporate event or function. He often discusses his sensational career, as well as delving into topics such as overcoming challenges, maximising success and determination. He has a warming personality and provides a fantastic insight into the life of a rugby union player.

To book former Queensland Reds and Australian rugby player, Tim Horan, as the rugby speaker for your corporate event, function or conference, simply contact the Champions Rugby Speakers agency by filling in our online contact form. Alternatively, call a booking agent directly on 0207 1010 553.