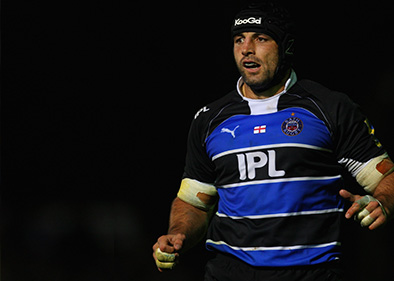 A larger than life character on and off the field, Danny Grewcock MBE is a World Cup winner and Bath rugby legend. Widely regarded as the hardest man to ever step foot on a rugby pitch, Danny Grewcock has a notorious reputation within the game and experienced many a disciplinary and sanction throughout his wonderful career. A second row that received numerous bans along with a number of accolades, Danny Grewcock MBE is an extremely popular rugby speaker performing at engagements across the nation.

Starting his career with his local team Coventry, Danny played for the club during their most successful ever period as they came extremely close to being promoted to the Premiership for the first time. Grewcock’s impressive performances saw him receive his first England cap whilst playing for Coventry a rare occurrence for a second-tier player. Having progressed all the way from the second division to the World Cup, Danny’s desire and determination to reach the top of the game cannot be questioned and he is the perfect person to provide motivational rugby speaking at your event or function. The qualities Danny has demonstrated in his rugby career are ones that can be applied to all situations in life further increasing his popularity and demand as a rugby speaker.

In 1997, Danny made the move to the Premiership signing for Saracens playing 63 games and scoring 25 points in four years. He played a crucial role in the club’s 1998 Anglo-Welsh Cup win scoring a memorable try in the final against London Wasps which he fondly reminisces upon as a rugby speaker. In 2001 Danny signed for Bath, the club where he really began to establish himself as one of the greatest locks in the game. His impressive performances once again meant he was selected in England’s 2003 winning World Cup squad but sadly due to an injury he picked up in the group stage match against Uruguay played no further part in the tournament. Suffering an injury during this campaign was a devastating blow for Danny especially when he was playing some of the best rugby of his career. However, Danny did not let this blow affect him and came back stronger arguably being England’s best player during the 2004 Six Nations tournament. Speaking about the incredible strength and resilience required to comeback from such a comeback, Danny Grewcock provides a truly insightful and motivating account as a rugby speaker.

Having the ability to overcome adversity in life is a skill not exclusive to the sporting world which makes Danny an excellent rugby speaker as he can draw on his career experiences to offer guidance on how to deal with negative situations in life. Danny missed the 2007 World Cup this time not as a result of injury but through suspension and didn’t play for his country again ending his England career after playing 69 times and scoring 10 points. He also made 5 appearances for the British and Irish Lions in his career and his club form continued to remain at a high standard and he retired from the game in 2011 after playing 154 times for Bath and scoring 30 points. A personality that exudes passion and determination, Grewcock demands the highest standards of himself and others and this unrelenting ethic makes him an inspiring and motivating rugby speaker.

Having played at the highest level of professional rugby, Danny has numerous anecdotes about sharing a dressing room with some of the most well-known faces in the sport making for fascinating and hilarious content during his work as a rugby speaker. An incredibly respected and recognisable figure in English rugby, Rugby World Cup winner Danny Grewcock MBE is available to hire as a rugby speaker for any event, dinner or function where he is certain to be a fantastic addition to any occasion.

When he’s at corporate events, Danny is known to cover the following topics: