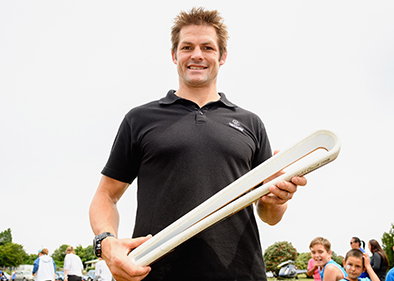 Regarded As The Most Influential Rugby Player Of All Time

Richie McCaw is a retired New Zealand rugby union legend, he is the most capped test rugby player of all time. McCaw played at openside flanker or number 8 throughout his legendary career. McCaw has won the World Rugby player of the year award on a record 3 occasions and his career is one that will be spoken about for generations to come.

McCaw was the first All Black to reach 100 appearances, and the first rugby union player to play in 100 tests. McCaw has broken nearly every possible record and he also has the equal most appearances at the World Cup. McCaw played for provincial side Canterbury between 1999-2015, and Super Rugby side Crusaders between 2001-2015.

He won the NPC five times with Canterbury and the Super Rugby title four times with the Crusaders throughout his sensational career. His debut for the Crusaders came in 2001, although he played only eight minutes in the Super 12 Rugby, he was called into the New Zealand squad for the first time. He made his debut against Ireland and was awarded man-of-the-match, an incredible achievement on debut. He was appointed All Blacks captain in 2004 and led the side to World Cup victories in 2011 and 2015.

McCaw played 148 times for New Zealand and captained the country in 110 of those. He had a magnificent record as an All Black player and won 88.51% of his 148 games. Out of 18 international teams he played against, McCaw enjoyed a 100% success rate against 14 of them, including giants such as the British and Irish Lions, Wales, Scotland and Argentina.

As well as the aforementioned domestic and international success, McCaw also won 7 Tri-Nations titles, 3 Grand Slam tours and the Bledisloe Cup an astonishing 8 times. His career has not only built a legacy for himself, but he has changed the future of rugby union, he is recognised across the world as being the most influential rugby player of all time.

McCaw is an honest, down to earth man who has a great personality and offers great wit, he is bound to give your corporate event or function that cutting edge to make it special. As a rugby speaker, McCaw often discusses his remarkable career, he often delves into the topics of dealing with pressure, being under the spotlight, leadership and maximising success.

When at corporate events, McCaw often discusses the following topics:

To book New Zealand legend, Richie McCaw, as the rugby speaker for your corporate event, function or conference, simply contact the Champions Rugby Speakers agency by filling in our online contact form. Alternatively, call a booking agent directly on 0207 1010 553.