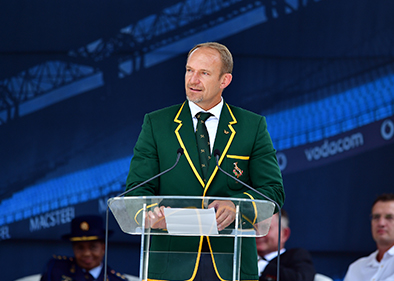 Francois Pienaar is a retired South African rugby union player who led South Africa to World Cup victory in 1995. The flanker, Pienaar, played a total of 29 times for the Springboks in an international career that spanned between 1993-1996.

His professional career started at provincial side Transvaal in 1989, Pienaar impressed for a number of seasons before being called up to the South African side in 1993. In his first test for South Africa, he was appointed the captain and remained as captain of the country until his last appearance. He was also the captain of the provincial side, Transvaal, and led them to Super 10, Currie Cup and Lion Cup success in 1993. The club would retain the Currie Cup under his captaincy the year after, his domestic and international performances saw him named the international player of the year by the Rugby World magazine in 1994.

He captained South Africa to their first-ever World Cup success in 1995, they won in a dramatic final against New Zealand which saw the Springboks win in extra-time. Pienaar’s dedication was shown throughout the match as he continued playing with a calf strain for a large portion of the match. Pienaar ended his international career in 1996 to play in Britain, he became the player-coach of the Saracens. Under Pienaar’s leadership, the Saracens came second in the Premiership and won the Pilkington Cup. Pienaar retired from rugby in 2000 and became the CEO of Saracens.

Pienaar was voted 50th in the top 100 great South Africans, as well as being inducted into the international rugby Hall of Fame. Pienaar has an inspiring personality and can provide extremely moving speeches. As a rugby speaker, he often discusses his career, as well as talking about leadership, diversity and dealing with pressure.

When he's at a corporate event, Pienaar often discusses the following topics: