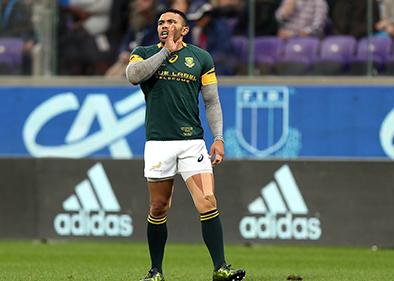 Bryan Habana is a former South African rugby union player who played for a number of domestic sides. Habana played at wing and enjoyed a high scoring career both domestically and internationally.

Habana started his career at the Golden Lions in 2003, he made his Currie Cup debut in 2004 and was later voted South Africa’s most promising player. Later that year he earnt his South Africa call up and made his debut in a Test against England, aged just 21, Habana came on and scored a try in what ended up being a defeat. Nonetheless, this was a debut to remember from a young, rising star in the game.

He moved to the Blue Bulls in 2005, the club came third in the Super 12 that season. The Bulls also made the final of the Currie Cup in which Habana played a pivotal role. Habana was nominated in the five-man shortlist for the 2005 World Player of the Year and was voted the South African player of the year.

In the 2007 domestic season, the Bulls made the Super 14 final. They were 19-13 down heading into the final minute when Habana scored a match-winning try, the flyhalf made an easy conversion and the Bulls won 20-19. This was one of the most dramatic Super 14 finals in history and Habana scored the crucial try. 2007 proved to be the most influential year in Habana’s career as he played a massive role in South Africa’s World Cup winning squad. He scored two tries in the semi-final against Argentina which meant he equalled the record for most tries in a World Cup.

Habana continued to put in consistent performances at both international and domestic level, he played in both the 2011 and 2015 World Cups. In the 2015 edition, Habana equalled the record for most World Cup tries ever after an impressive hat-trick against the USA.

Habana announced his retirement from all rugby in 2018 and has since become a rugby speaker, his witty personality makes him the ideal speaker for your upcoming corporate event or function. As a rugby speaker, he often discusses maximising success, peak performance and teamwork.

To book former Bulls and South Africa rugby player, Bryan Habana, as the rugby speaker for your corporate event, function or conference, simply contact the Champions Rugby Speakers agency by filling in our online contact form. Alternatively, call a booking agent directly on 0207 1010 553.