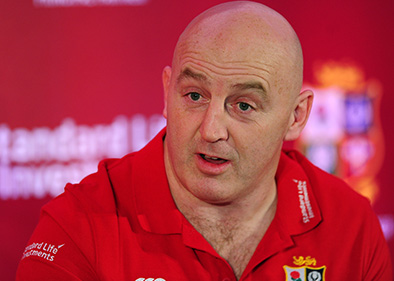 Keith Wood is one of Ireland’s most iconic and respected rugby players. A driven and hard-nosed player, Wood excelled as a hooker for Ireland and the British and Irish Lions over an international career that spanned an impressive nine years. A former Ireland captain and 2001 World Rugby Player of the Year, the wonderful Keith Wood has been inducted into the IRB Hall of Fame & Rugby Hall of Fame showcasing the tremendous impact he made on the game. Now retired and working extensively as a pundit, Keith Wood is also an incredibly popular and sought rugby speaker appearing at events across the UK to captivate and engage guests.

Wood began his playing career with Garryowen, before moving to play for Harlequins, where he spent the remainder of his career aside from a sabbatical with Munster during the 1999-2000 season. Wood’s International debut came against Australia in Brisbane in 1994, and he also played his first Rugby World Cup in 1995. Having enjoyed an extensive and diverse career in domestic rugby, Keith Wood is able to share tales and anecdotes from this level of the game while distinguishing key differences that separate the standard from International rugby.

Wood played in an Ireland side that often struggled at the top end of the game, but proved himself to be in the mix with the best players in the world during his career. This was most noticeable on the Lions‘ victorious tour of South Africa in 1997. His stellar and outstanding performances that separated him from the pack resulted in widespread adulation for his talents earning him the title of World Rugby Player of the Year.

Wood was one of the most charismatic and passionate leaders in the game, and this showed through as he backed up tour captain, Martin Johnson with some inspirational displays in their two-Test Match victories. Wood played his second Rugby World Cup in 1999; Ireland lost out to Argentina in quarter-final playoff. His fantastic performances once again led to yet another tour with the with prestigious British & Irish Lions where he played in all three Tests against Australia in 2001. Wood’s experiences in a Lions’ shirt will always remain as fond memories to him and he shares the importance of team cohesion and unity during his work as a rugby speaker, a trait that is applicable and relevant to all walks of life.

The Lions were less successful on this occasion, losing the series 2-1. Wood continued to represent Ireland until the 2003 Rugby World Cup, his third, retiring after their 43-21 quarter-final loss to France in Melbourne.

Since Wood’s retirement, he has forged a career in the media with both the BBC and The Daily Telegraph. An incredibly well respected and popular pundit that utilises his knowledge and experience to provide informed, insightful contributions making him an incredibly popular figure. Keith Wood’s popularity also carries over rather effortlessly to his work as a rugby speaker where he draws large crowds and speaks eloquently about peak performance, leadership and maximising success ensuring event attendees are left motivated and inspired by his performance.

A true gentleman and outstanding performer, Keith Wood is a legend and icon of Irish rugby that has etched his name into folklore and history books. Inducted into the Rugby Hall of Fame as a testament to his prowess within the game of rugby, Wood's is held in the highest regard within the game. A spectacular rugby speaker that expertly engages with audiences to providing compelling and captivating rugby speaker presentations, the impressive Keith Wood is available to hire as a rugby speaker for any event, dinner or function where his presence is certain to lead to an unforgettable event.

When he’s at corporate events, Keith is known to cover the following topics:

To book Former Irish Rugby player, Keith Wood, as the rugby speaker for your corporate event, function or conference, simply contact the Champions Rugby Speakers agency by filling in our online contact form. Alternatively, call a booking agent directly on 0207 1010 553.