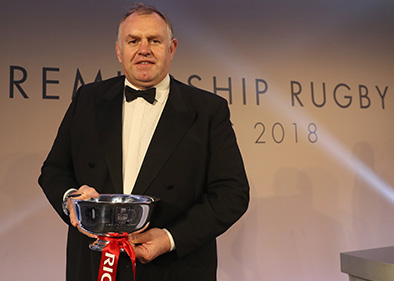 Enjoying a long standing career with his home team the Leicester Tigers, Richards has gone on to play for his nation, coach future players and now gives entertaining after dinner talks as a rugby speaker. Schooled in Leicester, Dean was a police constable for Leicestershire Constabulary between the 1980s and 1990s before English rugby union became professional. Seeking a career in rugby union, Dean Richards began his professional rugby career playing for Roanne in France before eventually making debut for the Leicester Tigers in 1982. A hugely popular rugby speaker, Dean Richards speaks of the game before professionalism began and how he had to go to France to begin what would become a spectacular career.

Flourishing in his early years at Welford Road, Dean’s leadership ability shone through leading to him captaining the Leicester Tigers for four seasons in the early 1990s. During his fantastic playing career with the club Richards won the league twice and the cup three times on his way to being voted Whitbread's Rugby World Player of the Year in 1990/91. Continuing to consistently lead from the front and inspire both his team and the entire county, Dean Richards led Leicester Tigers to their first Heineken Cup final in the clubs history and would act as a huge motivation and inspiration for generations to come.

A fine domestic and club player it was no surprise that Richards also enjoyed great success on the international stage as he was capped three times for England Schools and played for the Barbarians in addition to the England Under-23s. Making his senior England debut in 1986 against Ireland at Twickenham during the Five Nations Championship, Dean scored two vital tries in a 25–20 points win and regularly reflects upon what was arguably the perfect start to his international career during his work as a rugby speaker. Becoming an integral part of the England pack in the early 1990s, Dean Richards established himself as one of the top number eights in the world, winning 48 England caps and six caps for the British and Irish Lions. Playing in the Rugby World Cup campaigns, Dean Richards has gained a tremendous amount of knowledge and experiences of both domestic and international rugby allowing him to providing incredibly entertaining and insightful performances as a rugby speaker.

Nothing short of a cult hero at Leicester Tigers, following his retirement as a player Richards took over from Bob Dwyer as coach of Leicester in 1998 and in his first full season as Director of Rugby won the Allied Dunbar Premiership. A magnificent achievement on its own. Richards did not stop there as his Tigers team successfully defended the title for four years in a row under him in addition to winning two Heineken Cup trophies in a period of sheer dominance in both English and European rugby that will be spoken of for many years to come. Eventually going on to coach Harlequins, Richards’ fine form as a coach continued as he led the club to promotion in his first year before controversy struck following ‘bloodgate’. An incredibly well documented and scrutinised moment in sporting history, Dean Richards discusses both the event and his hugely successful coaching career during his performances as a rugby speaker.

Dean Richards has become a well-known face both on and off the rugby field and many of his speeches are indicative of his history as a rugby player; he is a strong and inspiring rugby speaker with particular expertise in sports leadership and teamwork; Richard’s refusal to balk at the most intense of situations and progressive playing techniques make him an engaging after dinner speaker. A true icon, visionary and hero to many, Dean Richards is available to hire as a rugby speaker for any event, dinner or function and is certain to provide a truly unforgettable experience.

When he’s at corporate events, Dean is known to cover the following topics:

To book Leicester Tigers Legend, Dean Richards, as the rugby speaker for your corporate event, function or conference, simply contact the Champions Rugby Speakers agency by filling in our online contact form. Alternatively, call a booking agent directly on 0207 1010 553.