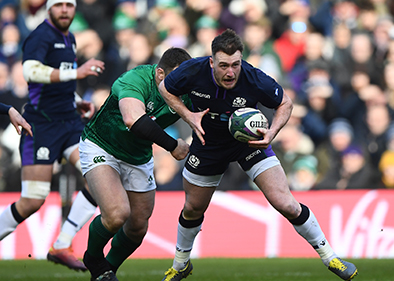 Stuart Hogg is a Scottish rugby union player who has recently moved to the Exeter Chiefs after a 9 year stint with the Glasgow Warriors. Playing at fullback, Hogg has built a fantastic career which has opened many new pathways to success, such as after dinner rugby speaking.

Hogg signed for the Glasgow Warriors after showing consistent performances at amateur level for teams such as Stirling County. He made his debut in the 2010-11 season before starting to feature regularly in the first team in the 2011-12 season. After a couple of solid seasons, Hogg really started to excel and showcase his talents in the 2012-13 season. Hogg had a very successful Pro12 campaign and was named in the Dream Team at the end of the season. After 7 years at the club, Hogg became the youngest player to reach 100 appearances for the Scottish giants.

He represented Scotland’s national side at youth level and was always close to breaking into the first-team squad. He made a very impressive debut in the 2012 Six Nations against Wales which earnt him a starting place in the next match against France; this match bought about Hogg’s first try for his country as he scored in the 8th minute. In the 2013 Six Nations, Hogg scored a memorable 95-metre try against Italy. He picked the ball up near his own defensive try line and ran the length of the pitch, playing a crucial role in Scotland’s convincing 34-10 victory.

2015 bought about domestic success for Hogg, the Glasgow Warriors won their first-ever Pro 12 title and he played an influential part in the side throughout the tournament. He played in his first World Cup in 2015 and helped Scotland reach the quarter-finals. Hogg became the first Scottish player to win the Six Nations Player of the Championship after an incredibly impressive 2016 tournament. Hogg has built a great career and is now highly regarded as one of the best fullbacks in international rugby. Hogg has moved to English side the Exeter Chiefs and is set to start playing for the club following the 2019 Rugby World Cup.

To book current Exeter Chiefs and Scotland player, Stuart Hogg, as the rugby speaker for your corporate event, function or conference, simply contact the Champions Rugby Speakers agency by filling in our online contact form. Alternatively, call a booking agent directly on 0207 1010 553.