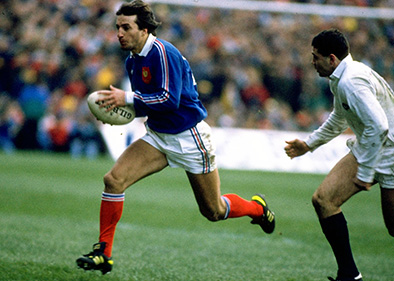 Former rugby player and rugby speaker, Scott Hastings is a Scottish national treasure; the most capped centre for his nation with 65 caps, Hastings is a popular rugby speaker and frequently presents on the corporate after dinner speaker circuit. Playing in 51 Internationals with his brother and fellow rugby speaker Gavin, Scott Hastings is a former club captain and played full-back for the Scottish Schools. With Gavin by his side the Hastings brothers were a force to be reckoned with on the pitch and remain the only brothers to have played together in a British & Irish Lions Test match. Following his retirement as a player, Scott has worked extensively as an incredibly popular pundit in addition to working across the UK as a much sought after rugby speaker.

Making his first appearance for Scotland a month after his 21st birthday in January 1996 against France Hastings stayed with the team until 1999 when he retired to become a dedicated rugby speaker. Whilst with the team Scott Hastings captained the Barbarians against the 1993 All Blacks and played in ten of Scotland’s fourteen Rugby World Cup games.

Taking a step away from playing Scott Hastings made his debut as a television presenter in 1999 when he joined ITV‘s commentary team for the Rugby World Cup, retaining this role for the 2003 competition. As well as working as a rugby speaker for the Scottish national team Scott Hastings has appeared at a number of British & Irish Lions after dinner speaker events after taking part in the team’s 1989 tour of Australia and 1993 tour of New Zealand.

Scott Hastings played rugby union with the Scottish Rugby Union and Edinburgh Reivers for 2 years prior to his eventual retirement in 1999. Now working as a dedicated rugby speaker, Hastings also contributes to the commercial and sponsorship of the Watsonian Rugby Club. Scott continues to work as a television presenter and writes the occasional column for The Sunday Times and commentates for Setanta Sport on their coverage of The Celtic League and with Sky Sports in their coverage of the Heineken Cup.

These media and punditry experiences have enhanced Hastings’ presentation and delivery skills as well as increase his popularity to make him and even more polished and professional rugby speaker.

A tremendous rugby personality that has excelled on the field as a player and off the field as a pundit and rugby speaker, the enigmatic Scott Hastings is a spectacular performer that has effortlessly transferred his prowess from on the field to life off the pitch to become an engaging and captivating rugby speaker. One of a small collection of brothers to have played together, Scott Hastings is available to hire as a rugby speaker to recount tales and anecdotes from his career while sharing the tales and anecdotes garnered from his decorated career within the game.

When he’s at corporate events, Scott is known to cover the following topics:

To book Former Scotland International, Scott Hastings, as the rugby speaker for your corporate event, function or conference, simply contact the Champions Rugby Speakers agency by filling in our online contact form. Alternatively, call a booking agent directly on 0207 1010 553.