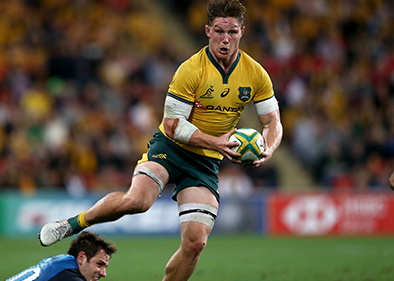 Current Captain Of The Australian National Side

Michael Hooper is the current captain of the Australian rugby union side and domestic side, the Waratahs. Hooper, who started his rugby union career for the Brumbies in 2010, has enjoyed a very successful career to date and reflects on this during his time as a rugby speaker.

Hooper made his debut for the Brumbies in 2010 after crucial player, George Smith was ruled out with an injury. Hooper impressed in his first couple of seasons with the club before making a huge breakout in 2012, Hooper put in regular impressive performances and was soon the talking point of Australian rugby. After winning Australian Rugby Union Rookie of the year award, Hooper signed for Super Rugby side the Waratahs.

Hooper made his international debut in 2012 after coming off the bench against Scotland. He made an instant impact on the side and soon earnt a regular place in the starting XV, after an impressive number of matches in 2013, Hooper was named the Wallabies player of the year. His first game as captain came against France in 2014 following an injury to the then captain, Stephen Moore in the fifth minute. Hooper became the Wallabies captain after the Test series against France and was also named in the 2015 World Cup squad. Following an impressive 2016 season, Hooper was named the Wallabies player of the year for a second time, making him only the 4th player of all time to win it twice.

Hooper continues to excel as a player, both internationally and domestically, he is available to book as an after dinner rugby speaker. During his time as a rugby speaker, Hooper often discusses his ongoing career, dealing with pressure and the importance of quality leadership skills. He offers great insight into the sport with his bubbly personality and provides great wit and humour.

When at corporate events, Hooper often discusses the following topics:

To book current Waratahs and Australian rugby union player, Michael Hooper, as the rugby speaker for your corporate event, function or conference, simply contact the Champions Rugby Speakers agency by filling in our online contact form. Alternatively, call a booking agent directly on 0207 1010 553.