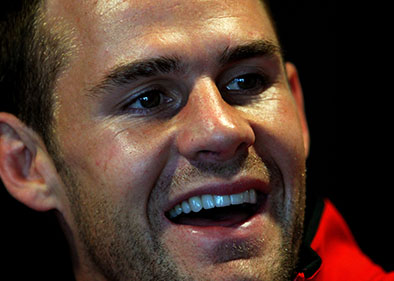 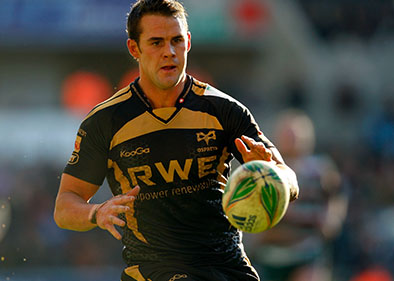 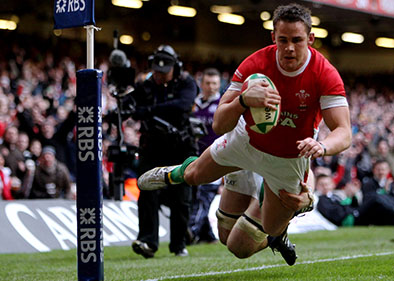 Lee Byrne is a former Welsh International Rugby Union player. Byrne’s usual position was full-back, although he also played on the wing. Starting his career playing dual-code rugby, Byrne’s first played for Bridgend Athletic RFC and later Tondu RFC. Byrne was then later spotted playing Rugby League for Bridgend Blue Bulls and signed for the Llanelli Scarlets. An incredibly talented player and individual, Lee Byrne went on to make almost 50 appearances for Wales as well as representing the British and Irish Lions. Having experienced playing in rugby’s highest profile matches and tournaments, Lee Byrne is an incredibly sought after and popular rugby speaker that appears at events across the UK.

Following on from his top-flight performances for the Llanelli Scarlets in both the Celtic League and Heineken Cup, Byrne was called up to the national squad for the November Test series. Byrne made his International debut as a replacement against the All Blacks in November at the Millennium Stadium. Byrne later played in the win over Fiji as well as the unfortunate loss to South Africa. Since then, Byrne has played in the 2006 Six Nations Championship as well as earning numerous other caps. During his work as a rugby speaker, Lee discusses the pride and honour of representing his country along with sharing stories about the hard work it took to get there. An esteemed rugby speaker, Lee Byrne also eloquently pinpoints the necessary attributes and requirements to ensure success at the highest level in anything you do, making for insightful and invaluable advice that guests can apply in all walks of life.

His sole appearance in the 2006 Autumn internationals was on the wing against the Pacific Islands. Byrne was a revelation in the 2008 Six Nations Championship tournament at full-back and a key component of Wales’ Grand Slam. Whilst playing against Connacht in 2007, Byrne demonstrated his abilities as a stand-in kicker when he kicked two penalties and two conversions, after fly-half Shaun Connor went off injured. Byrne scored tries against England & Italy in the 2008 Six Nations Championship.

Following his superb performances for Wales in the 2008 Autumn Internationals against South Africa, New Zealand and Australia, Byrne had been tipped not only for a place in the British and Irish Lions Squad, but also a place in the starting 15. This was confirmed in April of 2009, when Byrne, along with Ireland’s Rob Kearney, was selected as one of the British and Irish Lions’ fullbacks for the tour. A huge honour in the career of any British player, as a rugby speaker, Byrne shares the incredible experience and adulation of representing the coveted Lions as well as recollecting hilarious tales from his time involved with a prestigious group of players.

After the fourth tour match, Byrne was one of five players to be picked for three of them. In January of 2014, it was reported that Byrne had agreed to join Newport Gwent Dragons from the end of the 2013/14 season. In April of 2015, it was announced Byrne was to retire from all rugby with immediate effect, after failing to recover from a shoulder injury. A devastating end to a glittering career, Lee Byrne now focuses predominantly on his work as a rugby speaker where he is available to hire to perform and appear at events, dinners and presentation evenings across the UK to share his fascinating and captivating story.

When he’s at corporate events, Lee is known to cover the following topics:

To book Former Welsh Rugby player, Lee Byrne, as the rugby speaker for your corporate event, function or conference, simply contact the Champions Rugby Speakers agency by filling in our online contact form. Alternatively, call a booking agent directly on 0207 1010 553.