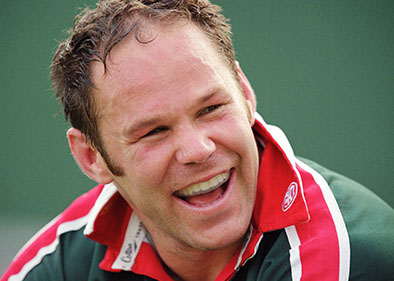 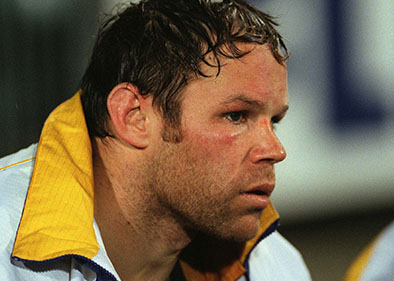 Former All Blacks player, Josh Kronfeld is a retired rugby union player who since retirement, has become a rugby speaker and TV presenter in both the UK and his home nation. Born in Hastings, New Zealand Josh Kronfeld made his rugby union debut in 1993 playing for Otago after graduating from the local university. Remaining with Otago for seven years Kronfeld also played Super Rugby for the New Zealand Highlander’s team. Perhaps best known in England for his stint with Leicester Tigers, Kronfeld spent 3 years at Welford Road becoming somewhat of a crowd favourite. A distinguished player that had the honour of playing for the prestigious All Blacks, Josh Kronfeld now works extensively as a rugby speaker sharing an insight into the world’s most successful team.

Playing as a flanker, Josh Kronfeld also gained more than fifty gaps for his National Team, New Zealand and made appearances as a player and rugby speaker at both the 1995 and 1999 Rugby World Cup campaigns allowing him to share tales and anecdotes from the competition with event attendees. Josh Kronfeld left New Zealand in 2000 to join British team, Leicester Tigers where he worked as a player and rugby speaker from 2001 until his retirement in 2003. Upon retirement Josh Kronfeld began working as a dedicated rugby speaker, appearing at sporting events and conferences around the globe. He returned to Otago to undertake a physiotherapy degree and upon graduating, began working as a rugby speaker and TV presenter back in New Zealand.

Alongside his work as a rugby speaker and physio, his credits as a TV presenter include the ChoiceTV series Brunch, he was also a contestant on the 2009 New Zealand series of Dancing with the Stars. These exploits and ventures have further increased his popularity and status as a rugby speaker leading to increased demand in his services.

An incredibly accomplished rugby player that enjoyed a successful career, Josh Kronfeld is able to share knowledge and expertise about rugby and the comparison between England domestic rugby and that of the rugby in the Southern Hemisphere. A media personality and presenter, Kronfeld has reached the pinnacle of sport playing for the illustrious All Blacks and is available to hire as a rugby speaker where he is certain to captivate and engage guests at any event, dinner or presentation awards evening leaving the audience filled with motivation and inspiration along with great enjoyment due to his fantastic entertainment skillset.

When he’s at corporate events, Josh is known to cover the following topics:

To book Former All Blacks & Leicester Tigers Player, Josh Kronfeld, as the rugby speaker for your corporate event, function or conference, simply contact the Champions Rugby Speakers agency by filling in our online contact form. Alternatively, call a booking agent directly on 0207 1010 553.