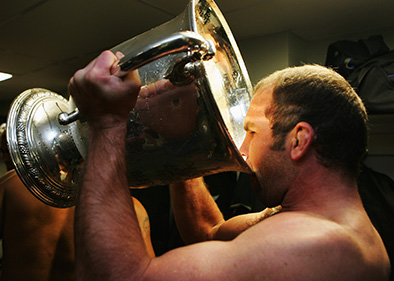 New Zealand born rugby speaker and former All Black’s Captain Anton Oliver is an experienced and talented sportsman who boasts success from the earliest moments of both his life and career. The son of former All Black player and fellow rugby speaker Frank, Oliver Anton’s rise to captaincy of the New Zealand national team heralded him as the heir to the once great Sean Fitzpatrick. A hooker for Marlborough and Otago in the National Provincial Championship and Air New Zealand Cup, Oliver spent twelve seasons with the Highlanders in Super Rugby as well as representing the legendary and esteemed All Blacks on 59 occasions. An academic with a passion for culture, Oliver is known as a modern NZ renaissance man and works extensively as a rugby speaker alongside his work as an asset manager.

Beginning his professional playing career aged just 17, Anton Oliver showed signs of early leadership and brilliance as he captained the New Zealand Under-19 team in the infancy of his career before beginning his work as a rugby speaker and team leader at a young age where he helped cultivate a sense of determination and ambition amongst those associated and impacted by him. Representing the junior All Blacks at every junior age group, Oliver changed positions from a Number 8 to a hooker where he would play for the remainder of his career. Going on to play for Otago for over a decade, it came as no surprise when he went on to captain the both Otago and the Highlanders. During his work as a rugby speaker Oliver shares tales and anecdotes from his career along with incredibly useful leadership lessons which led to him captaining arguably the most dominant side in sport that are applicable to all walks of life.

Anton Oliver’s first game as an All Black came in 1995 when Laurie Mains picked Oliver to fill in as Sean Fitzpatrick’s back up for the Bledisloe test against Australia. Anton’s debut was remarkably almost 20 years to the day that his father made his debut at the same ground against the same opposition. Upon being appointed captain of the All Blacks, Oliver created the first father and son captain combination for the All Blacks and speaks of this incredibly proud accomplishment during his performances as a rugby speaker in addition to sharing stories from his 59 caps and devastating injury which put his career in question.

Beyond his work as a rugby speaker Anton Oliver also boasts a successful academic career having been accepted to the prestigious Oxford University and Cambridge University following his retirement from professional rugby and garnered a degree in environmental policy, an area which he remains passionate and frequently appears at academic conferences and after dinner speaker events discussing the topic. Anton Oliver also studied during his career as a professional attaining degrees in both Commerce and Physical Education. These exploits increase Oliver’s repertoire, knowledgebase and content allowing him to truly captivate and mesmerise guests with an extremely educated approach and outlook on both life and rugby.

With an extensive and varied background Anton Oliver is an ideal sports speaker for those interested in rugby, physical health and health science but is similarly well suited to after dinner speaker events that focus on the environment and creating sustainable industry. Playing in 298 first class games and a member of the All Blacks for thirteen years, an astonishingly long time and a testament to Oliver's ability, resilience and tenacity, Anton Oliver was labelled as the "thinking man's rugby player" and his tremendous career coupled with his fascinating personality and passion for knowledge and arts make Anton Oliver the idyllic rugby speaker for any event, dinner or function where he is available to hire to ensure guests are left with an unforgettable occasion.

When he’s at corporate events, Anton is known to cover the following topics:

To book Iconic All Blacks Captain, Anton Oliver, as the rugby speaker for your corporate event, function or conference, simply contact the Champions Rugby Speakers agency by filling in our online contact form. Alternatively, call a booking agent directly on 0207 1010 553.