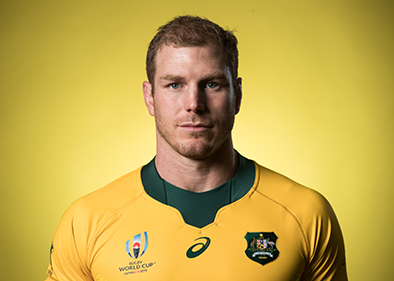 David Pocock is an Australian rugby union player who currently plays for domestic side the Brumbies in the capital of Australia, Canberra. Born in Zimbabwe, Pocock moved to Brisbane in 2002 and now represents Australia in international rugby union.

Pocock made his debut for the Western Force in the Super Rugby in 2006. After a number of fantastic performances domestically, Pocock made his international debut for Australia in a match against The Barbarians in 2008. In 2010, Pocock won the John Eales Medal, this is the highest accolade in Australian rugby and has only been achieved by the greats of the Australian rugby game.  In the same year, he was nominated for the IRB Player of the Year, an award given to the best rugby union player in the world for that year. Again in 2011, Pocock was nominated for the same award and became a finalist two years in a row.

After captain James Horwill was injured in 2012, Pocock became the Wallabies captain and enjoyed a test series as the leader of his national side. At the end of the season, he left domestic side the Western Force to join the Brumbies. Pocock was a part of the 2015 World Cup side which came runners up, he scored a try in the final and played fantastically throughout the tournament.

In 2016, Pocock signed for Japanese side the Panasonic Wild Knights, he will continue to play for the club following the 2019 Rugby World Cup. Outside of rugby, Pocock openly speaks about his concern for climate change and homophobia in professional sports.

Pocock is a passionate character who likes to express his opinions and feelings towards important, ongoing worldwide issues. This makes him the ideal rugby speaker for your upcoming event or function, he often discusses his ongoing career but also delves into important topics such as homophobia in sports, climate change, maximising success and dealing with pressure.

When at corporate events, Pocock often discusses the following topics: