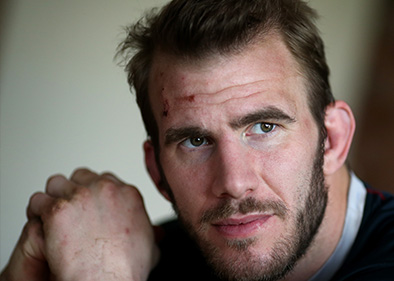 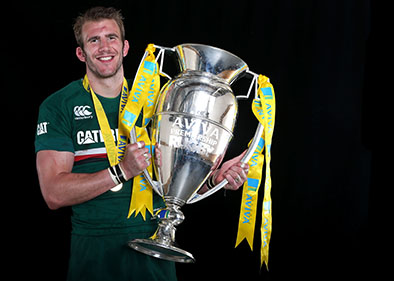 One of the most prominent and skilled flankers in English Rugby history, Tom Croft was a stalwart figure for both the Leicester Tigers and England squads. Gifted in both blindside and openside flanker positions, Tom is known for his unusual speed for a forward and is widely regarded as one of the fastest players in his Tigers squad. A wonderful guest and rugby speaker at events, Tom is a charming character who enjoys interacting with audiences whilst on stage.

Making his senior debut for Leicester Tigers in 2005-06 season following an education at Oakham School, Tom would go on to help the side with 16 appearances the following season to claim a Premiership title and Anglo-Welsh Cup. Experiencing his breakthrough season in 2008-09, Croft would play an elemental role in taking the Tigers to The Heineken Cup final as well as a Guinness Premiership title. Discussing the commitment and drive it takes during talks as a rugby speaker to be a leading elite athlete in sport, Tom can provide advice to business and sporting environments alike.

Alongside his prolific domestic and club career, Croft’s England career was beginning to bloom, becoming part of the 2008 Six Nations Championship squad, Tom gained his first cap against France in Paris. Croft would go on to play in Martin Johnson’s squad for international test matches against Australia, South Africa and New Zealand, an experience that he will never forget and one that is considered as arguably the greatest challenge in rugby. During his performances as a rugby speaker Croft discusses the discipline and standards required to perform against this level of competition as well as touching upon the relentless pressure and challenges these teams posed. Injury hampered Croft’s latter years but he will forever remain a prominent figure in rugby, many believe that England has never had a player with such abundant abilities.

Nominated for the IRB Player of the Year for 2009, Croft gained plaudits worldwide and has been heralded an "outstanding talent who has everything" and the " fastest loose forward he had ever seen" to name a few. Huge praise for a player with the talent and ability to live up to the recognition, the Leicester Tigers legend represented his club on 173 occasions in addition to making 40 appearances for England and being capped 5 times for the British & Irish Lions. A player that often defied odds and logic, following a triple fracture of his vertebrae, a specialist described the injury "as close as you can to being paralysed”. A sensation and miracle, Tom Croft has also played for the England 7s team once again highlighting his tremendous versatility and prowess as a rugby player.

Adept to the world of hospitality as a rugby speaker, Tom has had rave reviews for his enthusiasm and character at events. Sure to tailor his content to a client’s briefs, Tom will be an ideal rugby speaker for your event and is available to hire for any dinner, function or presentation evening where his presence and performance is certain to transform any occasion.

When he’s at corporate events, Tom is known to cover the following topics:

To book Former England and Leicester Tigers Flanker, Tom Croft, as the rugby speaker for your corporate event, function or conference, simply contact the Champions Rugby Speakers agency by filling in our online contact form. Alternatively, call a booking agent directly on 0207 1010 553.