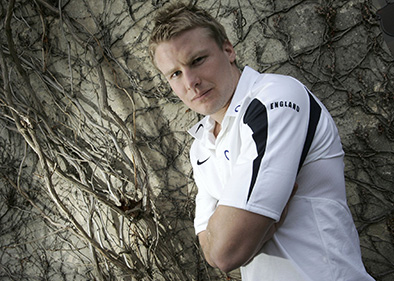 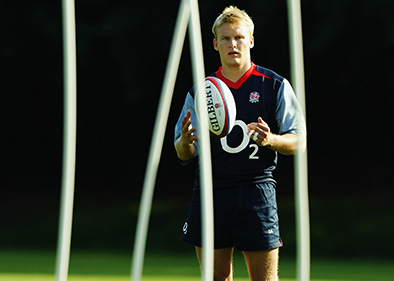 Stuart Abbott MBE is a South African born rugby union footballer who played centre for London Wasps and England. Announcing his immediate retirement on 24 October 2007 due to a shoulder injury, Stuart called time on a stellar career that saw him leave the game as a Rugby World Cup winner. Born in Cape Town, South Africa, Abbott eventually went on to move to England and represent the nation. A Leicester Tigers and London Wasps player, since his retirement Abbott has become a Backs coach for Rosslyn Park FC in addition to working extensively as a rugby speaker.

He was educated at Western Province Prep School and Diocesan College, which is commonly known as Bishops‘, where he says he was caned, an experience he speaks of during his work as a rugby speaker. Springbok centre Robbie Fleck and Selborne Boome went to the same school allowing Abbott to compete and play with high quality players from a young age helping to shape his career. He took a degree in economics at Stellenbosch University and played for the Northern Free State Griffons in the Currie Cup. Stuart Abbott later played for Western Province and South Africa U23 as he continued his journey and growth within the game of rugby.

During the 1999 Rugby World Cup, Abbott signed for English club Leicester Tigers, who had lost several players to international duty and made two appearances on the recommendation of former Tigers and Springbok fly-half Joel Stransky. Eternally grateful for the opportunity, during his work as a rugby speaker Stuart discusses his first taste of English rugby and how it allowed him to get his foot into the door to eventually become an England Rugby World Cup winner. In 2001 he played for the South African Super 12 side Stormers before being signed by English club London Wasps. It was at Wasps he rocketed to prominence in 2002–03 as a prime force in the team that won the Zurich Premiership, he repeated this for 2003–04 when the club reached the finals of both the Heineken Cup and the end-of-season Zurich Premiership playoffs. He formed an exciting centre partnership with Fraser Waters and discusses the relationship the two formed along with sharing tales, stories and allegiances to the London Wasps during his work as a rugby speaker.

He turned down an approach from South Africa coach Rudolph Straeuli prior to the Rugby World Cup but decided to play for England, a decision that would etch his name in the history books. Stuart Abbott scored on his England debut when he scored one of the five tries in England’s 43–9 Rugby World Cup warm up match with Wales at the Millennium Stadium in August 2003. After impressing again in a pre-World Cup trial against France two weeks later was selected in England’s World Cup squad.

In 2003, he appeared in three Rugby World Cup games, adding a second try in the runaway win over Uruguay. England went on to win the World Cup and with his team-mates Abbott was appointed an MBE in the 2004 New Year’s Honours. He missed out on the 2004 Six Nations Championship through injury but showed his class for his club, earning his call up for the 2004 summer tour. He struggled with injuries after the World Cup and broke his leg in 2005 in a Heineken Cup game between Wasps and Biarritz. Abbott did however enjoy a very successful period at London Wasps winning the Heineken Cup, Zurich Premiership and in his last season there, the Powergen Cup.

In 2006, Abbott joined the newly promoted Harlequins for the 2006–07 season, but only made 17 appearances for them before his injury-enforced retirement. In May 2008, Abbott was announced Backs Coach at Rosslyn Park FC, who finished second in the 2008/2009 season. A popular figure amongst players and fans, despite playing just 9 International matches for England, Stuart Abbott MBE is a Rugby World Cup winner and is available to hire as a rugby speaker for events, dinner and presentation awards night where he will share the glory that captured the nation.

When he’s at corporate events, Stuart is known to cover the following topics:

To book Former England Rugby Player, Stuart Abbott, as the rugby speaker for your corporate event, function or conference, simply contact the Champions Rugby Speakers agency by filling in our online contact form. Alternatively, call a booking agent directly on 0207 1010 553.