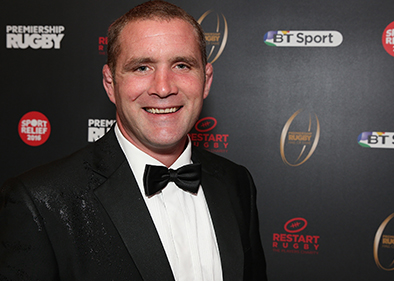 Phil Vickery MBE is widely as one of the legends of the game of Rugby Union. Capped 73 times for his country, and twice a British & Irish Lion, Vickery has also captained England at the 2007 Rugby World Cup and was part of the historic team that lifted prestigious The Webb Ellis Trophy in 2003. Although retired from the game, Phil is still actively involved through coaching and commentating with his views being regularly sought after by the media. Regularly writing columns for the national press, Phil Vickery MBE also works extensively as a rugby speaker appearing at a host of events and functions to discuss leadership, professionalism and peak performance.

A fan favourite and icon for Gloucester Rugby and London Wasps, Phil Vickery MBE played 200 games of professional domestic rugby in addition to 73 International caps for England. These experiences have provided Vickery with a tremendous amount of knowledge and expertise about the game of rugby in addition to a host of entertaining and insightful anecdotes to share with guests and event attendees. Representing the Lions on 5 occasions, Vickery speaks about the honour of playing for the select team along with the importance of team cohesion to success, a skill that is applicable and translates to all areas of work and life.

Phil’s profile extends well beyond rugby, with high profile appointments such as ambassador to the Prince of Wales’ Countryside Trust, work with Wooden Spoon and promotional work with global brand McDonalds. In 2011, Phil won the hugely popular BBC TV cooking show Celebrity MasterChef which presented him to a new audience of over 4 million. This growth in fanbase and popularity has increased Vickery’s ever high demand as a rugby speaker.

A prominent businessman alongside being a prolific player and rugby speaker, Vickery’s Raging Bull story began back in 2003 when Phil started a company to manufacture playing kits for rugby clubs. Phil chose the name Raging Bull for his emerging company based on the nickname he acquired whilst rampaging around the pitch. The company logo was obvious at this point and the iconic bull symbol made its first appearance. Through his company Phil has supplied kit to teams across the country showcasing his business and managerial abilities alongside his outstanding communication skills which transfer effortlessly to support his work as a rugby speaker.

A very popular figure within the game of rugby that is incredibly engaging and approachable, Vickery is also able to discuss the harsh reality of professional sport during his work as a rugby speaker. Suffering from a number of severe neck injuries that eventually ended his career, Vickery shares the drive and determination that was required to get through an incredibly challenging mental battle. A household name that has excelled in various areas of life and in particularly on the rugby pitch, Phil Vickery MBE is available to hire as a rugby speaker for events, functions and presentation evenings across the UK.

When he’s at corporate events, Phil is known to cover the following topics: