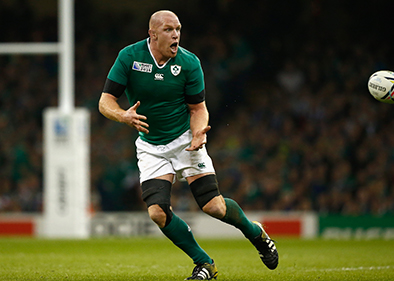 O’Connell signed for Munster in 2001 and soon made his debut in a match against Edinburgh. He was an instant regular in the Munster side and made his debut in the Heineken Cup match against Castres Olympique which Munster won. After a number of marvellous performances for Munster, O’Connell made his debut for Ireland against Wales in the 2002 Six Nations competition. O’Connell scored a try in the match but claims to not remember it at all! During the first half, he was knocked clean unconscious and continued to play, during that time he scored a try and has no recollection of it.

He played a vital role in Munster’s squad that won the 2003 Celtic League. He played in his first World Cup in 2003 and took part in 5 games, including the quarter-final match against France. O’Connell captained the Irish side in their opening game of the 2004 Six Nations campaign due to the absence of Brian O’Driscoll. 2004 was a successful year for both O’Connell and Munster, winning the last ever Celtic Cup. O’Connell was a part of the Munster team that won the Heineken Cup in 2005-06, he played an integral part in their semi-final and final games.

O’Connell enjoyed a 15-year career at Munster where he played 178 matches. He later signed for Toulon but never played a game for them. O'Connell's dedication and loyalty is often discussed during his time as a rugby speaker, he often reflects on his dedication to Munster and the Irish national side. He also represented the British and Irish Lions and made 7 appearances. O’Connell continued to play for Ireland and Munster until he was forced to retire from all forms of professional rugby based on medical advice.

As a rugby speaker, O’Connell discusses his professional career and how to overcome a career-ending injury. His genuine personality and great character make him the perfect speaker for any type of event.

To book Former Ireland and Munster player, Paul O’Connell, as the rugby speaker for your corporate event, function or conference, simply contact the Champions Rugby Speakers agency by filling in our online contact form. Alternatively, call a booking agent directly on 0207 1010 553.