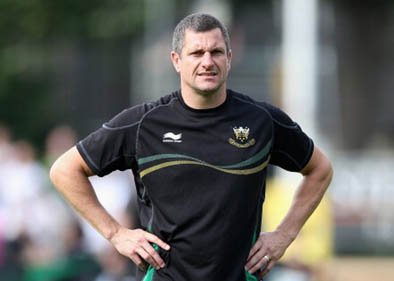 Paul Grayson MBE is a former rugby union player for Northampton Saints and England. Playing at fly-half, Grayson built a legendary status at Northampton Saints, where he played for 19 years. Grayson started and finished his career at the Saints without playing for another club.

As a Saints legend, Grayson finished his career as the all-time leading points scorer for the club and will forever remain as one of the most successful players in the clubs history. He scored every single point for the Saints in their 2000 Heineken Cup final victory against Munster, a game where the Saints won 9-8 in front of a packed Twickenham crowd.

As an incredibly talented rugby player, Grayson also made 32 appearances for England where he scored 400 points in the process. He was a part of the famous World Cup winning squad of 2003 and was knighted with an MBE. Grayson’s ability was there for all to see and he has built a legacy for his children, who are all within the Saints academy and first-team set up, to build upon. Grayson ended his international career as England’s second-highest all-time top point scorer; since retiring he’s been passed by Owen Farrell but remains third on the all-time list.

Grayson showed dedication, commitment and loyalty throughout his career which makes him the perfect speaker for your upcoming events. He will discuss his career and what it means to be a World Cup winner, as well as discussing the importance of remaining committed to your craft.

After his playing career came to an end, Grayson was appointed the assistant head coach at the Northampton Saints. He then left the role of assistant head coach in 2012 but has recently been re-appointed as a kicking consultant. Grayson also enjoys a career as a rugby speaker where he showcases his bubbly personality and great wit. As a rugby speaker, he discusses his successful career, as well as the highs and lows of being a professional rugby player.

When he's at corporate events, Paul is known to cover the following topics:

To book Former Northampton Saints player, Paul Grayson, as the rugby speaker for your corporate event, function or conference, simply contact the Champions Rugby Speakers agency by filling in our online contact form. Alternatively, call a booking agent directly on 0207 1010 553.