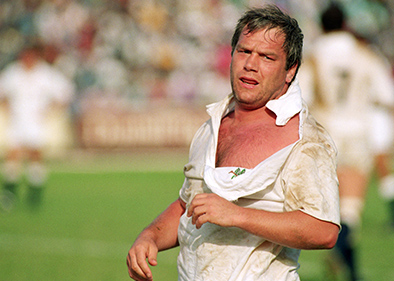 Rugby speaker and former England player Jeff Probyn is known for his career as a prop in the 1980’s and early 90’s. Born in Bethnal Green in London Probyn spent time playing for Askeans, Streatham and Wasps and made his international debut for England in 1988. Now retired Jeff Probyn is a commentator and sports speaker as well as working in rugby management. Alongside his extensive work within the game, Probyn regularly appears at events as a rugby speaker sharing tales and anecdotes from his distinguished career within the game.

An innovative and impressive rugby speaker and player Probyn was known for his low scrummage style, a technique so effective that it led a number of his competitors to removing the sleeves of their playing shirts believing that he used them to give him leverage and power. Their efforts were for nought however as Probyn continued to play in his unique style and became renowned as a force to be reckoned with in both domestic and international games.

Retiring in 1993 after winning 37 caps for England, Jeff Probyn has gone on to work as a rugby speaker in a number of capacities; not only does he regularly contribute as a sports speaker and Full Contact expert for talkSPORT radio but he has also been an active member of rugby union coaching and management.

Probyn spent time as a member of Club England, the Rugby Football Union Committee where he worked as a rugby speaker and assisted in the running and management of the group. Alongside this role Jeff Probyn also managed the England Under-21 team. These administrational and managerial experiences allow Probyn to provide knowledge and expertise that are applicable to many walks of life allowing him to resonate with a diverse and varied audience.

Whilst in this role Probyn played a vital role in instating Clive Woodward and Andy Robinson as coaches in representative rugby, he returned to the RFU in the 2000 and once again played a pivotal role in electing Clive Woodward as the England coach and sat on the board that, in 2006, reviewed and replaced England’s coaching team with that led by Martin Johnson, who would go on to lead England to a World Cup victory.

As well as working as a rugby speaker Jeff Probyn is an Honorary President of the rugby charity Wooden Spoon. A rugby personality that has excelled in every facet of the game where it be as a player, coach or commentator, Probyn’s diverse and extensive knowledge of that game that has been derived from varying circumstances and positions within the game allow him to provide compelling tales and anecdotes to share with guests and audiences during his work as a rugby speaker. Able to provide a fascinating insight into what it takes to succeed as a player, coach and commentator as well as sharing the invaluable information of what key characteristics apply to each discipline, Jeff Probyn is available to hire as a rugby speaker for any event, dinner or function where he is certain to be a fantastic addition to any occasion.

When he’s at corporate events, Jeff is known to cover the following topics: